By Sinead Farrell at Croke Park

An Orla Cotter free proved to be the difference as Cork retained their Liberty Innsurance All-Ireland senior camogie crown after another compelling battle with rivals Kilkenny.

The sides were level on no less than eight occasions in their third consecutive All-Ireland final meeting, but the Rebels scored the decisive point through Cotter, who was superb from frees (0-05) all afternoon.

It rounds off an incredible day for Cork after their intermediates secured All-Ireland honours in front of a crowd of 21,453.

Cork match winner Orla Cotter on coming out the right side of a match that was tit-for-tat @CorkCamogie @KilkennyCamogie #rtegaa pic.twitter.com/MQRmHTAvjj

Kilkenny were first out of the blocks in the first half with a fine point from Michelle Quilty in the opening attack from the throw-in.

Cork defender Chloe Sigerson responded less than a minute later from a well-struck free from distance as both sides opened up their lungs.

The Rebels enjoyed most of the possession in the early stages and were almost in for a goal when Linda Collins pounced to dispossess the ball and was awarded a free from close range. Orla Cotter stepped up for the tap-over to push Cork in front with her first of six frees.

Kilkenny were struggling to get a foothold on proceedings and Cork were awarded a penalty in the eighth minute when Denise Gaule came in with a late challenge on Amy O’Connor who was coming in along the endline in search of a goal.

Goalkeeper Aoife Murray came all the way up to the Canal End to convert the opportunity but her effort had too much air under it and it sailed over the bar. 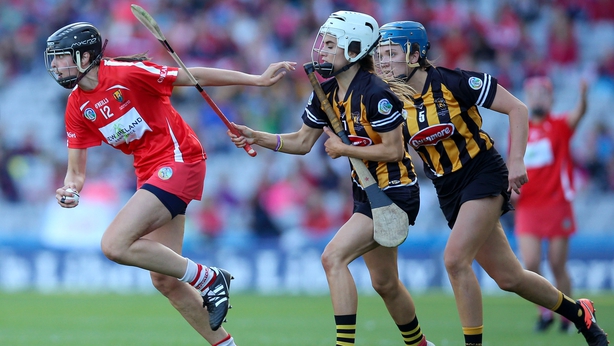 Both sides were reliant on getting scores from frees with Orla Cotter and Gaule trading points from dead ball situations all afternoon.

The Cats then threatened for a goal from a long ball in but Murray dealt with the situation and Gaule found her range from the resultant ‘65.

The momentum appeared to be swinging Kilkenny’s way by this stage and Julie Ann Malone levelled the decider on 18 minutes.

Cork struck back with two points on the trot, the first was another excellent long-range free from Sigerson followed by a Katrina Mackey score to land Cork’s first from play in the 23rd minute.

Gaule was in scintillating form from her frees and finished with 10 points in all. She grabbed the next four scores of the game, one of which was from play to give Kilkenny the lead for the first time with a two-point advantage.

@CorkCamogie captain Aoife Murray accepts the O'Duffy Cup and gives thanks to many #rtegaa pic.twitter.com/3GnRfnaHP5

But Cork’s Orla Cronin would have the last say of the opening half with two points to ensure both sides were inseparable at the break.

The sides were level for a third time after Mackey and Gaule exchanged points shortly after the restart before Cotter gave Cork a two-point advantage from frees.

Similar to last year’s final, it was a tactical encounter throughout and a Meghan Farrell point was Kilkenny’s first score in 12 minutes.

With the sides locked at 0-11 apiece, Kilkenny went sniffing for a goal again but were denied but a brilliant double-save from Murray with Gaule accounting for the ‘65 as the pace of the game started to dip.

Further points from Amy O’Connor and Sigerson helped Cork back into the lead in the final 10 minutes.

Gaule responded once more for Kilkenny before Cotter showed nerves of steel to nail a long-range free to ensure the O’Duffy Cup would again be heading back to Cork this year.