Tyrone fans and management never thought it would have taken so long but ten years have passed since they last won and contested an All-Ireland final. Amid a changing footballing world, the Red Hand have endured many ups and downs in the intervening decade in their quest to sit all alone at the top table. We look at the long road travelled since. 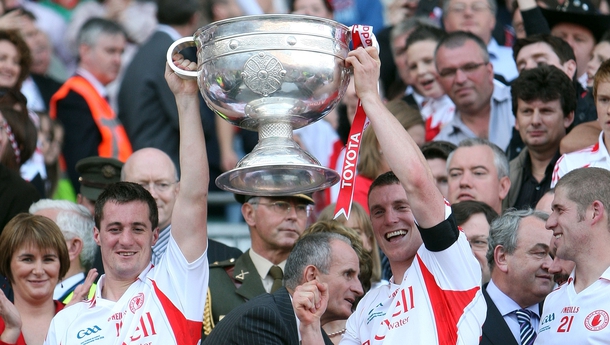 As was the case in 2005, Tyrone took the winding road to All-Ireland success, though the '08 journey had a few more stops en route. Kerry, again were the opposition in the decider, but Mickey Harte's men held firm when it mattered most. A Tommy McGuigan (r) goal just after the break ultimately proved decisive in ending the Kingdom's three-in-a-row aspirations.

Their bid to retain their crown was going to plan. Cork were waiting in the last four. Tyrone's hopes, however, were disrupted somewhat by Sean Cavanagh picking up a stomach bug which meant he did not start the game. He did come on for the last 20 minutes but the momentum was clearly with Cork who ran out deserving winners. Pat Spillane said afterwards that Cork 'out-Tyroned' Tyrone, while boastfully adding that Kerry were the team of the decade. 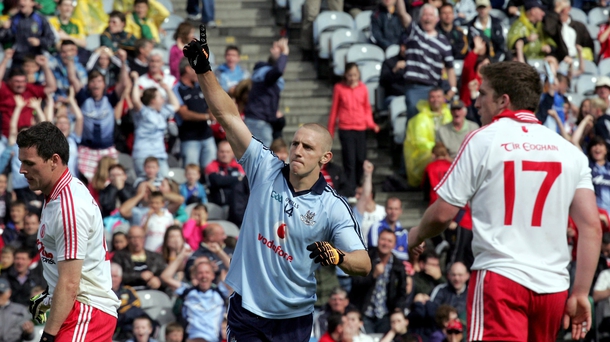 Tyrone are relegated from the Allianz League top flight after losing five of their seven games. Ulster was retained with the minimum of fuss but their season was to end against the Dubs at the All-Ireland quarter-final stage. Tyrone were part authors of their own downfall as they hit 17 wides. Eoghan O'Gara's late goal put the seal on a five-point win for the Dubs. 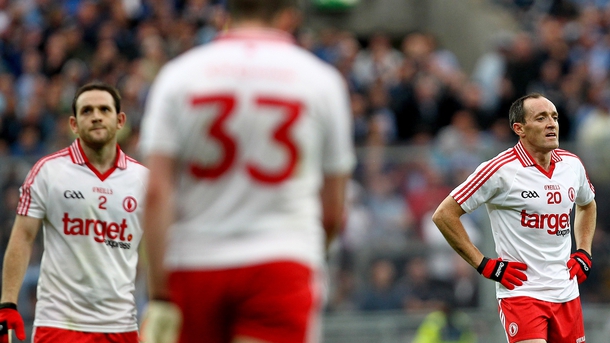 The rain fell incessantly as Tyrone proved no match for Dublin in the All-Ireland quarter-final. It was a summer where the Jim McGuiness revolution in Donegal was taking shape and the Red Hand had no answer when the sides met in the Ulster semi. Brian McGuigan, Philip Jordan, Brian Dooher and Ciaran Gourley would all opt to call it a day. 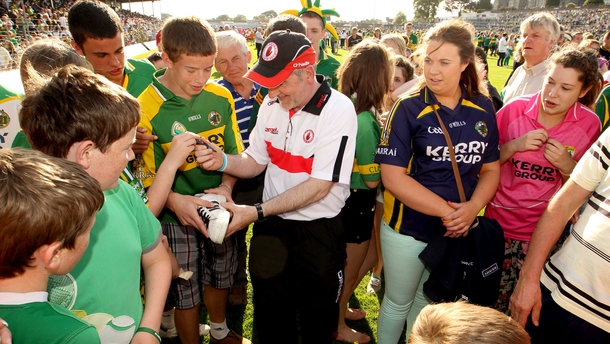 After two years in Division 2, promotion was comfortably achieved but that was the high point in 2012 as Donegal again proved a bridge too far in Ulster, while Kerry, no doubt vexed by what happened in the noughties, proved too good in the qualifiers. That said there was much goodwill afterwards for Mickey Harte as he signed countless autographs for Kerry fans..

3 August 2013: Things looking up but one man is not happy

Goalkeeper Niall Morgan, Conor McAliskey and Tiernan McCann are just some of the new recruits to Harte's squad as the manager looks to the future. Losing the Division 1 final by a point to Dublin and reaching an All-Ireland semi-final represented a decent year. That said, Joe Brolly's fury at Seán Cavanagh pulling down Conor McManus in the All-Ireland quarter-final was for many the talking point when it came to Tyrone's year. 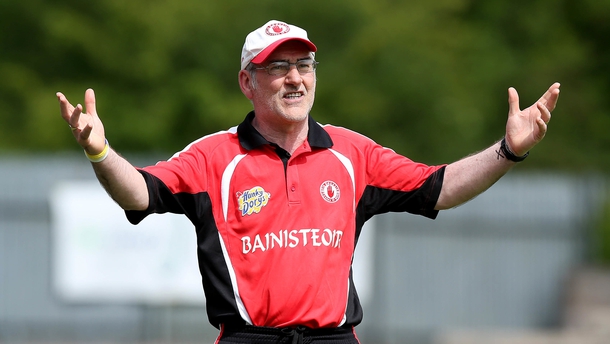 Tyrone's championship run ended when Armagh ran out winners in a round-two qualifier in Omagh. Pat Spillane called on Mickey Harte to step down. "I really do believe that it's time for a change, fresh face, fresh voice, new ideas and [to] rebuild," he said. "Since 2008 this is the sixth year [and] aside from the league performances, it's been fairly underwhelming." 2005 Football of the Year Stephen O'Neill and Conor Gormley call time on their county careers. 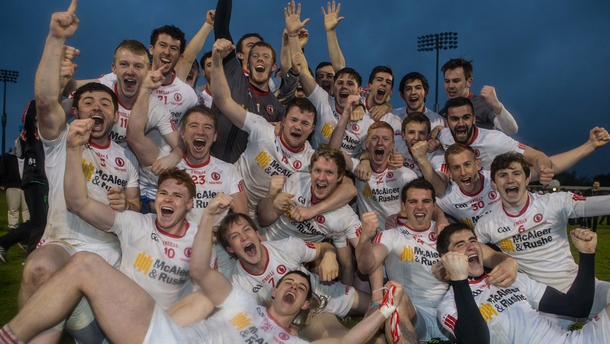 Tyrone claimed the All-Ireland U-21 title for the first time since 2001 The seniors, after relegation in the spring, would again find Donegal an itch they just couldn't scratch in Ulster, but their ability to safely navigate the summer's back door route was again to the fore as they reached another semi-final. U21 captain Kieran McGeary, his brother Hugh Pat, Niall Sludden and Jonathan Munroe were ultimately brought in to the senior squad. 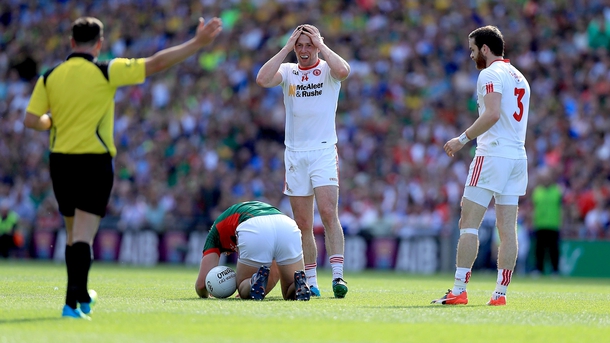 A division 2 league title was followed by a first provincial success since 2010 as Tyrone finally tamed Donegal in a match of note in this decade. What turned out to be an arm wrestle with Mayo in the All-Ireland quarter-final would ultimately end in disappointment. A one-point defeat was Tyrone's lot in game where Seán Cavanagh was sent off with 10 minutes to go. Crucially, Tyrone had eight minutes to force an equaliser but were somewhat clueless in their efforts.

"I never believed that Mickey (Harte) is a tactical genius" - Joe Brolly has his say pic.twitter.com/DnJLGndYKd

When Tyrone made light work of Donegal in the '17 Ulster semi, all eyes then focused on a likely date with Dublin later in the summer. Surely, Tyrone would be snarly enough to put it up to the champions. However, the best-laid plans went sadly awry a few minutes in, and the Ulster side did not possess the wherewithal to curb the tide.

'This is a better Tyrone team than last year' – Pat Spillane is impressed by Mickey Harte's team, while @SeanCavanagh14 is impressed by their character #SundayGame pic.twitter.com/S6wKPoi4nX

A Tyrone team that is free-scoring has reached an All-Ireland final. For the third time, they have done it via the scenic route. Dublin are the opposition and for many the task is seen as 'mission impossible'. "You cannot win big in Croke Park without having a go," said Joe Brolly, while Pat Spillane and Sean Cavanagh took note of Tyrone's improvement since last year following the win over Donegal in the Super 8s. There is hope it would seem!