Captain Tracey Leonard pulled the strings as Galway moved into the final four of the TG4 All-Ireland Senior Championships with an outstanding 5-11 to 0-12 defeat of rivals Mayo.

Dr Hyde Park was the picture-perfect venue for the repeat of the Connacht final, which Galway had won 0-17 to 1-12 on 24 June, and a big crowd was present for the rematch.

Galway have not claimed a Brendan Martin Cup since their only success in 2004 but they ran reigning All-Ireland champions Dublin to a point in the Lidl NFL semi-finals and have improved since.

And now Stephen Glennon’s charges can look forward to a first All-Ireland senior semi-final since 2014.

The Tribeswomen were already clear at half-time and their 3-6 to 0-6 lead came courtesy of goals from Caitriona Cormican, Ailbhe Davoren and Róisín Leonard.

Leanne Coen grabbed a deserved goal on the resumption and the game was over at that stage. Fiona Doherty continued to take the fight to Galway but Tracey Leonard orchestrated a stunning victory, with Róisín Leonard doubling up in the closing stages.

The only downside for Galway was Davoren’s late knee injury, and she looks a major doubt for the semi-final after she was stretchered off in the 45th minute.

Mayo captain Aileen Gilroy won the toss and her side played with a slight breeze at their backs in the first half. But after Doherty opened their scoring in the third minute, they were completely dominated.

Coen scored three points and Tracey Leonard tapped over a free while Galway raced into a 0-4 to 0-1 advantage by the end of the first quarter. 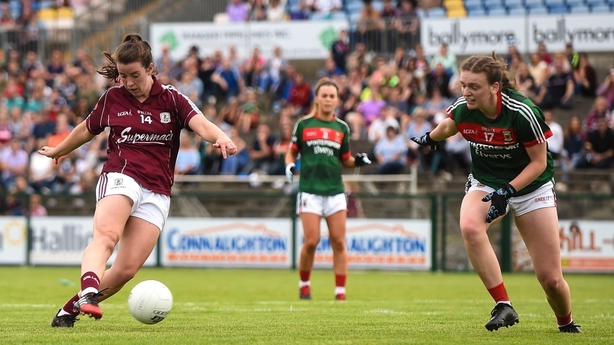 Grace Kelly scored a free in the 17th minute, a badly needed point for Mayo, but that was cancelled out in devastating fashion a couple of minutes later.

Tracey Leonard gave a brilliant hand pass behind the Mayo cover and Cormican wrestled her way through before she dropped a speculative effort over Laura Brennan’s head and into the Mayo net.

And then from the next play Galway went 2-4 to 0-2 ahead. Davoren profited on this occasion as she finished low to the Mayo goal.

It was a huge lead early in the game and despite two points from Grace Kelly (frees), and one from her sister Niamh Kelly, Mayo were in big trouble.

Galway’s third goal arrived four minutes before the interval when Róisín Leonard got through and composed herself before she slotted the ball into Brennan’s bottom right corner for a 3-6 to 0-6 half-time lead.

Galway scored their third goal just three minutes after the interval when Coen hit the target with another precise finish.

Tracey Leonard tagged on three points while Doherty starred, up the other end, with five points from play.

Mayo, beaten finalists in 2017, bow out at the hands of their provincial rivals and won't be seen in action again until next year's Lidl NFL Division 1 campaign.