Niamh McEvoy scored the crucial first goal as reigning TG4 All-Ireland champions Dublin advanced to a semi-final against Galway with an 18-point win over Kerry at Dr Hyde Park in Roscommon.

Dublin claimed the 2018 Lidl NFL title when they saw off Mayo in the decider on 6 May, and now they are 60 minutes away from another final.

In a repeat of last year’s semi-final, Kerry were right in the game at half-time and only trailed by 0-9 to 1-3 at the interval. Emma Dineen came up with Kerry’s first half strike to ensure they remained competitive.

But McEvoy blasted a goal in the second half and Dublin cruised through to a crunch match with the Connacht champions, with second half substitute Hannah O’Neill and Sinéad Aherne also among the goalscorers.

Dublin had impressive wins over Cavan and Mayo in the round robin stages. But they played against the breeze in the first half here and didn’t have it all their own way.

Early points from Carla Rowe and Aherne seemed to suggest that Dublin would take off and do something similar to what Galway had produced in the first of the double-header.

But Sarah Houlihan halved the deficit for Kerry when she scored their first point in the ninth minute.

Aherne slotted her second free but Louise Ní Mhuircheartaigh cancelled that effort out when she did likewise into the graveyard end.

Noelle Healy reasserted Dublin’s dominance and they held a double scores lead of 0-4 to 0-2 before Kerry struck against the run of play.

Dineen drove directly through the heart of the Dublin defence and she rattled her shot past the dive of goalkeeper Ciara Trant. 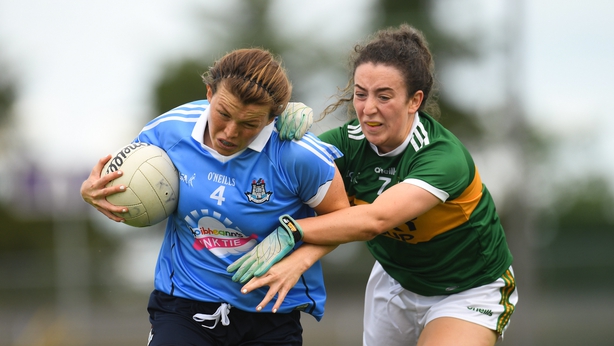 Dublin were behind for the first time in the match, but they replied like champions and scored the next five points in a row to re-take the lead.

Those scores gave Dublin a 0-9 to 1-2 lead before Houlihan doubled her first half tally to bring Kerry within a goal at half-time.

But Dublin took complete control as they shut Kerry out after half-time. They scored four points in a row, with Aherne’s seventh point giving Dublin a 0-13 to 1-3 lead in the 36th minute.

Kerry hit back but McEvoy bundled home a Dublin goal in the 42nd minute after a defensive mix-up from Kerry, and Mick Bohan’s side were 1-13 to 1-6 in front.

McEvoy continued to thrive while Carla Rowe also impressed, and Dublin moved ominously into the final four with O’Neill adding a second goal and Aherne got the third.