By Robert Cribbin at Croke Park

Kildare achieved their first All Ireland title at any grade since 1965 after they overcame Mayo in a thrilling Under 20 Final in Croke Park.

Jimmy Hyland was the star for Kildare as he kicked ten points in a man-of-the-match winning performance but they had heroes all over the field as they deservedly claimed the victory.

Mayo were gallant throughout and if it wasn’t for Aaron O’Neill tipping a late Ryan O’Donoghue free over the bar they could have forced extra-time.

Kildare were into their groove from the off, team captain Aaron Masterson kicking a point from distance with barely a minute on the clock after receiving a pass from Jimmy Hyland. 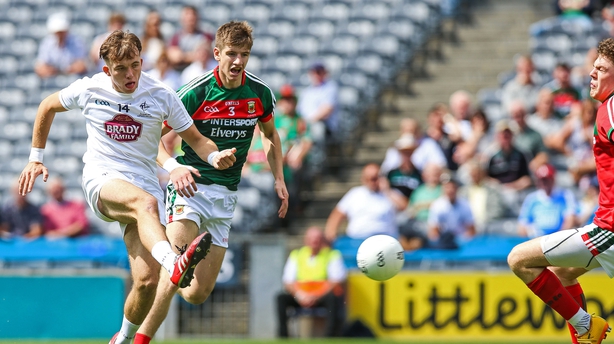 Mayo did respond well to go into the lead for the first time with Colm Moran scoring from play before Ross Egan found the target from a free.

Kildare then found another gear as they hit 1-3 in the space of three minutes with Brian McLoughlin converting a free to equalise while the full forward hit the net moments later when he was found inside by Paddy Woodgate and after beating his man he scored past Patrick O’Malley.

Jimmy Hyland duly added consecutive scores to put Kildare into a 1-4 to 0-2 lead.

Mayo replied with scores from Moran, Egan and Oisin McLaughlin which came either side of a Kildare score from Paddy Woodgate as the Lillywhites held a three-point lead halfway through the half.

Kildare kicked on again though as they scored four points on the bounce where McLoughlin, Masterson, Padraig Nash and Tony Archbold all split the posts before Egan and Hyland exchanged points as Kildare opened up a seven-point lead.

Egan’s fourth free of the half reduced the margin slightly before Michael Solan’s men received a lifeline in the 22nd minute when a poorly directed Aaron O’Neill kickout went straight to Ryan O’Donoghue and he powered forward before finishing in style.

Hyland would take the stage before the break as he kicked three points from play and even though Mayo got scores from Egan and Evan O’Brien it was Kildare who held a 1-13 to 1-9 lead at the interval after a brilliant half of attacking football.

Mayo got back within two points at the beginning of the second half with scores from play by Moran and Conor Diskin while Ross Egan had a good chance to reduce the lead to one but his shot fell short and from there Kildare began to take command.

Scores may have been at a premium in comparison to the first half but Hyland was still able to find the space to score two points from play for Kildare and when he added on two more frees the Leinster Champions looked in pole position as they held a 1-17 to 1-11 lead.

In desperate mode however, Mayo came out fighting with two Egan frees and a 45 from goalkeeper Patrick O’Malley reducing the lead to just three points.

Egan also had a brilliant chance for goal in the 56th minute when he found himself inside the Kildare defence but his shot was brilliantly saved by Aaron O’Neill.

Mayo suffered a late blow with the red card of Jordan Flynn in stoppage time after an incident with Darragh Ryan and when Hyland kicked his tenth point, Kildare moved into a four point lead.

Ryan O’Donoghue nearly broke Kildare hearts late on as he kicked a fine point from play before a 21 yard free in the last play of the game was touched over the bar as Kildare held on to achieve a brilliant 1-18 to 1-16 victory.