Eoghan O’Gara blasted two goals as Dublin romped to a 4-24 to 2-16 victory over Roscommon at Croke Park in their final Super 8s game.

The reigning All-Ireland champions had already topped Group 2 but wanted to ensure they got the perfect preparation heading into their All-Ireland semi-final clash with Galway next Saturday.

Paul Flynn and Michael Darragh Macauley scored the first half goals as Jim Gavin’s side raced into a comfortable 2-12 to 0-07 lead at half-time.

O’Gara added both strikes after the interval while substitutes Gary Patterson and Donie Smith scored the consolations for Roscommon.

Kevin McStay wasn’t on the sideline as he began 12-week ban, which stemmed from an incident during the defeat to Donegal. And stand-in manager Ger Dowd watched on as Roscommon could have conceded a goal inside the opening minute. Eoghan O’Gara gathered possession and forced a save from James Featherstone.

Costello scored his first point from the resultant 45 before that was cancelled out by Diarmuid Murtagh. Flynn and Ciarain Murtagh traded scores after that but there was an inevitability about would unfold.

Check out the full-time highlights here between Dublin and Roscommon! pic.twitter.com/XYwCsjexrR

Dublin scored five points in a row to pull clear between the 7th and 17th minutes. John Small and O’Gara scored either side of a three-point blitz from Small as his side drove into a 0-07 to 0-02 lead.

Roscommon were desperate for a reprieve and that was offered by captain Conor Devaney and Diarmuid Murtagh but Dublin’s first goal arrived in the 21st minute.

O’Gara was influential in the build-up and he passed to Flynn who scored an audacious effort from 20 metres out. Diarmuid Murtagh hit back three minutes later but Roscommon collapsed again before half-time.

Dublin took complete control again and scored 1-04 without reply. O’Gara, Flynn, Paddy Andrews and Costello scored the points. Then Macauley got through, latched onto a pass from Flynn and finished the killer second goal with four minutes of normal time remaining in the first half. 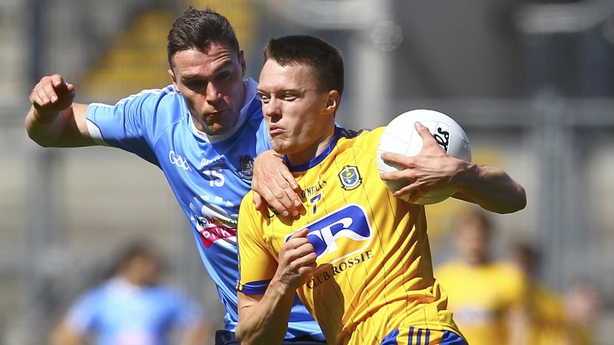 Diarmuid Murtagh and Niall Kilroy combined to reduce the arrears but Costello pushed Dublin into a big 2-12 to 0-07 half-time lead with his sixth effort.

Patterson was brought on for Ross Timothy at half-time and he finished to the net inside a minute but Dublin steadied themselves with a free from Costello.

O’Gara finally got his first goal in the 41st minute and the second arrived ten minutes later as the Roscommon defence weakened.

But Donie Smith was brought on for Peter Domican and he scored a goal in the 53rd minute. And Roscommon continued to thrive up front with plenty of goal chances while they scored five points in a row late on.

But Dublin were in devastating form and Bernard Brogan’s cameo, as a blood substitute, was another ominous sign before they clash with Kevin Walsh’s Galway next week. 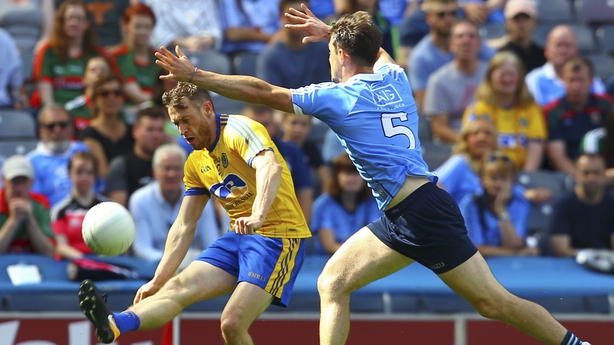