John Meyler said pressure comes with the territory when you pull on a Cork shirt as he urged expectant Rebel County supporters to make Croke Park a "sea of red" for Sunday's All-Ireland SHC semi-final showdown with Limerick.

Cork fell at the second-last hurdle a year ago when Waterford blitzed them 4-19 to 0-20. Then, Meyler was a selector under Kieran Kingston. He took the reins last autumn and led the county to a second Munster title on the bounce with victory over Clare.

That won't satisfy the appetite of their faithful though, as well Meyler knows.

"The Cork public will support the Cork hurling team. They want to see Cork winning. That pressure is always there. It's no different than last year or any other year.

"We want to see a sea of red in Croke Park.

Standing in their way is a resurgent Limerick side with a momentum and desire of their own. 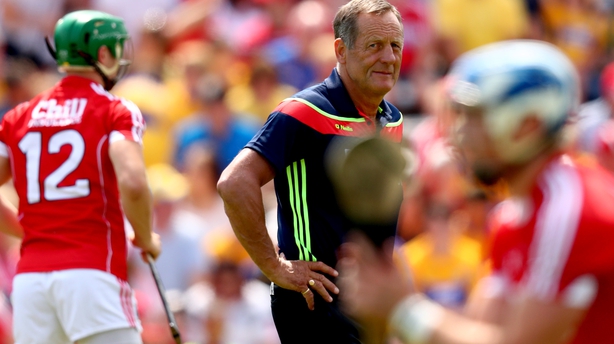 They last lifted Liam MacCarthy in 1973 and drew with Cork in their brilliant Munster round-robin clash in June.

"It's going to be one hell of a battle," added Meyler. "Limerick showed in their [quarter-final] match against Kilkenny a few weeks ago that they're there on merit.

"They are a really, really hard-working time with a lot of skill, a lot of energy, young players. It's 50-50. We face an almighty battle.

"We need to focus on our own players, our own process, keep that going for the full 70 minutes. Sunday is competitive, it's challenging - all that's good about hurling."

Cork haven't had it all their own way this summer. Against Clare in the provincial decider, they didn't lead for the first time until the 48th minute and were four points down at half-time.

Then, their leaders proved their worth.

"It was calm. The seniors guys stood up. Harnedy, Bill Cooper, Nash and those stood up at half-time and they came out and won by a few points in the end.

"We've learned an awful lot from last year and we've tried to put that into focus, into our gameplan.

"Hopefully that will come out against Limerick."