It's 2005 since Cork were last All-Ireland hurling champions and whatever about the length of time, the Rebel County will always be under pressure to deliver at the highest level every year, says manager John Meyler.

On Sunday next, Cork face Limerick in the second of this year's All-Ireland semi-finals, eight weeks on from when the sides played out a thrilling draw in the Munster round-robin.

Reflecting on that Páirc Uí Chaoimh epic, Meyler told RTÉ Sport: "It was extremely competitive in what was our third game in a row. They lost Declan Hannon early on and had Aaron Gillane sent off, so that did upset them a bit. That said, Limerick are a hard working side with a lot of skill and an abundance of energy.

"They went into a three-point lead with a few minutes to go but we showed great resilience and great character to then hit four points on the spin before they levelled it up."

The Cork boss, not surprisingly, is expecting another tight encounter at GAA HQ and added: "Sunday next will be just as competitive and challenging. Limerick showed in the win over Kilkenny that they have reached this stage on merit. We're also there on merit and we want to be on the right side of the result - a one-point win will do." 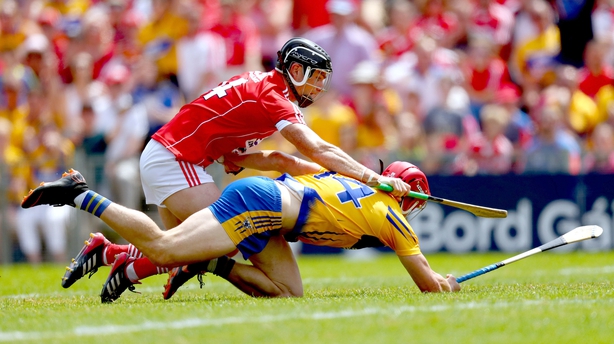 Cork's retention of their Munster title saw them on the back foot for much of the opening half against Clare, but they upped things considerably in the second period to deservedly retain their title.

Meyler singled out a crucial period before the break and the subsequent refocus in the dressing room as instrumental in the turnaround.

"I wouldn't say our first-half was poor. After 30 minutes we were only four points down and then Clare got a goal and a point to put them eight up. We then showed great character to get a goal straight away when Seamus (Harnedy) caught a great ball, passed it on to Luke (Meade) who scored.

"Mark (Coleman) then got a point from a sideline and we went in four down at the break. While we weren't playing great, we were still in the game. It was a matter of refocusing at half-time. It was calm. The senior guys - Harnedy, Cooper and Nash stood up and had their say."

Cork have fallen at the semi-final stage in 2014 and last year and so the pressure is there to reach the decider. The pressure is always there, according to Meyler.

"The Cork public want us to be in an All-Ireland every year," he said.

"They want to see Cork winning and that's no different from last year, or indeed any year. The fans will be there in Croke Park on Sunday and what we all want to see is a sea of red supporting the side."