The last game they lost at GAA Headquarters was a 2014 All-Ireland semi-final to Donegal. The result and the performances were very different this time around.

Four years ago, Dublin doubled down every time they conceded a score, committing more and more resources into attack and ended up surprise losers to a tactically savvier team.

On this occasion it was Donegal who were on the back foot throughout, though it was admirable that they made sure they had a say in this game right until the end.

Part of that was down to their own doggedness and footballing abilities, with players capable of picking off long-range scores to keep the three in-a-row All-Ireland champions just about within arms reach.

It would have been interesting to see what they could have done with Patrick McBrearty in the team, though, of course, the country’s form forward is out for the rest of the season after injuring his knee in the Ulster final win over Fermanagh.

Much if it though must go down to sloppy play from the Dubs, who had chance after chance to kill this game off and let them all pass. 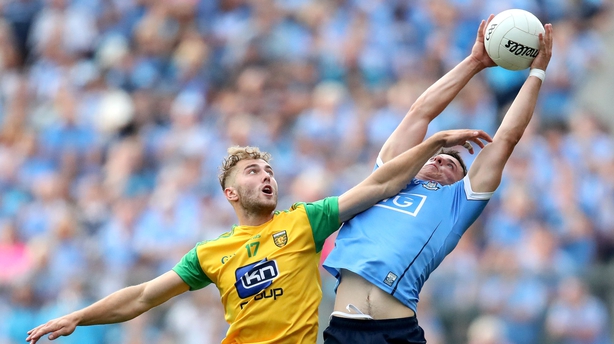 A glaring example of this was after 50 minutes when Dublin turned over a Donegal kick-out close to goals, and they had their opponents’ restarts under serious pressure all evening, but rather than make them pay, Con O’Callaghan chipped the ball straight back to goalkeeper Shaun Patton.

Not long after Brian Fenton was one-on-one with Patton and hit his shot straight at the man in black. Chance after chance was missed.

It would be hyper critical to say Dublin didn’t play well, beating the Ulster champions by four points in an All-Ireland quarter-final, but given the standards they have set they are judged by harsher standards than most.

This too was their toughest workout since they beat Mayo to claim Sam Maguire last September. They have a lot of spare capacity and they’re more than capable of filling it.

For the Dubs it’s a trip to Omagh to play Tyrone in the next round of the Super 8s, a game that has the potential to be hot and heavy, with Donegal going to Roscommon, both teams looking to pick up their first points, both games on Saturday.

There were changes on the two sides before throw-in.

The Dubs parachuted in Cian O’Sullivan to stiffen up the defence, Eoin Murchan was given his first Championship start while former Footballer of the Year Jack McCaffrey started for the first time since injuring his knee in last year’s All-Ireland final win over Mayo.

Stephen McMenamin and Eamonn Doherty came into the Donegal team and as a unit the Ulster champions took a while to find their feet in this game.

After just three minutes it looked as though they were going to be overrun as the Boys in Blue hit them in waves. 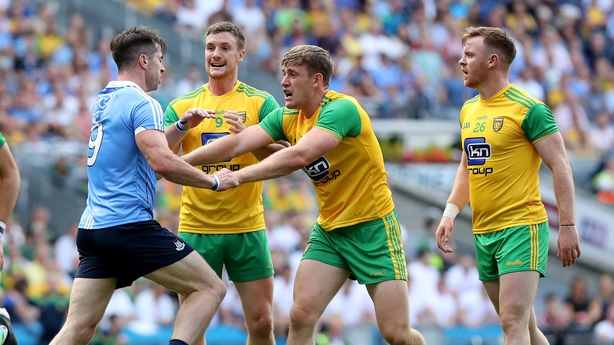 Dublin could have been three up only for HawkEye denying Ciarán Kilkenny on a marginal call. Donegal were being starved of possession, as they were strangled at source from the kick-out.

But, showing admirable clam and application, they eventually worked their way back into the match and after quarter of an hour they led 0-04 to 0-03.

A big momentum shifter came after 26 minutes when Jamie Brennan got a full sight of goal after two Dublin defenders jumped for the one ball and failed to make contact. The Bundoran man’s chances of becoming a local hero in front of the Hill went as he blazed high and wide.

From the subsequent kick-out Dublin went up the field and space opened up for Niall Scully, who cut inside two defenders with a solo off his left and then finished low past keeper Patton with his right.

There were goal shouts for both sides before the interval though, Paddy McGrath going down in the Dublin square only for penalty appeals to be turned down by referee Conor Lane.

At the other end, a Patton kick-out went badly array and straight to Con O’Callaghan, who got caught in two minds between shooting and passing and ended up doing neither.

Dublin moved seven ahead when Scully got his second goal almost straight after the restart, but the expected procession never followed and they were made work all the way down the finishing straight.