Galway are Leinster champions for the second season in a row and for the third time in their history as a brilliant display of full-forward play from Jonathan Glynn helped the Tribesmen to an impressive replay victory over Kilkenny at Semple Stadium.

Glynn was a late introduction before throw-in in place of Conor Cooney and he gave his marker Padraig Walsh a torrid time at the edge of the square. Glynn hit Galway’s first-half goal after 14 minutes, scored a point two minutes later and also laid on three other scores for his teammates in a stunning first-half performance.

Either side of him Cathal Mannion – six points – and Conor Whelan – four points – were also inspirational, but they needed to be in form, as Kilkenny somehow pulled to within one point in the second half thanks to goals from substitutes Colin Fennelly and Richie Hogan.

By the 19th minute Galway were 1-9 to 0-01 ahead with Kilkenny looking utterly helpless at times, but Ger Aylward’s goal a minute from the break gave them some hope for the second period in front of 25,102 spectators in Thurles. 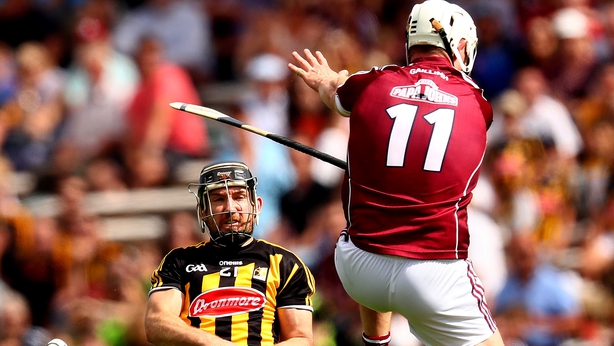 When Joseph Cooney pointed for Galway in the 33rdminute all of their front six had scored, but there was still time for Whelan to hit his third point as Galway led 1-16 to 1-07 at half-time.

The pace was frantic from the start, a stark contrast to last week’s flat affair at Croke Park. Perhaps it had something to do with the venue as Semple Stadium hosted its first Leinster hurling final. President Michael D Higgins was in attendance, as were the Artane Band and the Leinster Council officials, but this was well and truly a Semple Stadium occasion.

Amid the early mayhem and heavy hits, Galway raced clear thanks to points from Cathal Mannion, Whelan and Niall Burke, before TJ Reid finally got Kilkenny off the mark with a 12th minute free.

It took the Cats ten minutes to hit their next score, but by that time their hopes of a 72ndLeinster title were slim. Aidan Harte started Galway’s brightest period with a 13thminute score from distance, before the aerial bombardment of Glynn and Walsh began. 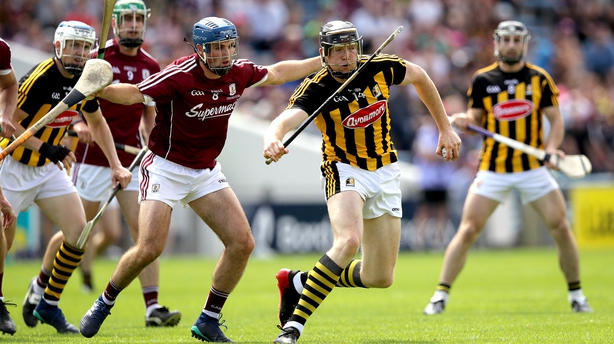 Glynn’s goal found the net via the hurl of Kilkenny goalkeeper Eoin Murphy, then Glynn’s flick sent Whelan in for a point, before Cathal Mannion pointed off the full-forward. Glynn then landed a great point of his own.

Reid did settle Kilkenny with a free and a 65, but another five points without reply from Galway arrived before Aylwrd found the net for Kilkenny. The Glenmore man did well to score considering he lost his hurley, but he seemed to take too many steps before he kicked the ball to the net from close range.

Following an exchange of points to start the half Joe Canning struck a ground stroke past the post, and straight away at the other end Kilkenny had a significant slice of fortune. James Maher – who hit their first point of the half – saw his shot rebound off the post and with James Skehill off his line Colin Fennelly finished to the empty net.

Galway looked to be tiring at this stage as the huge exertions of the first half took its toll, and a third Kilkenny goal really lifted the record winners. It arrived following a driving run from Reid, but when the ball broke to Richie Hogan his ground stroke was crisp and it flew past Skehill.

The goal meant Galway only led by one point – 1-20 to 3-13 – but Canning and Cathal Mannion stretched that lead out to three with ten minutes remaining.

Conor Cooney got off the mark with the help of Hawkeye, before Canning signed off on the win late on for Galway, who qualify for the All-Ireland semi-final, while Kilkenny face Limerick next weekend in the quarter-final.