By Dan Bannon at Páirc Tailteann

Kildare confirmed their place in the Super 8s with a blistering 11 point winning performance in Navan as Fermanagh simply could not reach pitch of the game.

Coming in cold, Rory Gallagher’s side made three changes from their Ulster final loss in an attempt to rejuvenate his side, but the emotions of the previous Saturdays rollercoaster provided Kildare the springboard for another big performance

Daniel Flynn exuded his sides new found confidence, he superbly fielded the ball on the edge of the square and powerfully rounded Che Cullen to bury to the net and Fermanagh’s hopes with it, after 8 minutes.

The goal raised the roof, the Kildare players fed off that energy to roar into an early 1-05 to 0-03 lead. The Cribbin brothers particularly excelling in this period both getting on the scoresheet.

In the meantime Ryan Jones, Declan McCusker and Séamus Quigley responded notching the first of his seven points in response.

Neil Flynn alongside namesake Daniel was expressing himself with some superb efforts and well taken frees to punish a wasteful Fermanagh.

Check out the full-time highlights here between Fermanagh and Kildare! pic.twitter.com/beznAsCmFu

Cian O’Neill’s side learned a huge deal from their loss in the Leinster championship to Carlow, who set up in very similar to Fermanagh.

They stretched the Páirc Tailteann pitch to the maximum and drove into the pockets of space time and time again. Midfield pair of Tommy Moolick and Kevin Feely pointed directly as a result of this learning curve, while centre back Eoin Doyle was making himself a threat in these area’s all evening.

Quigley added frees to keep the Ernesiders in touch, but another Flynn, Kevin, with a brace from wingback but Daniel Flynn had the final say on his half with a point to make it 1-13 to 0-05.

Fermanagh manager Rory Gallagher can take some consolation from the required honesty his team showed as they nibbled into the lead upon the resumption through a Quigley free and Ruairí Corrigan minor. 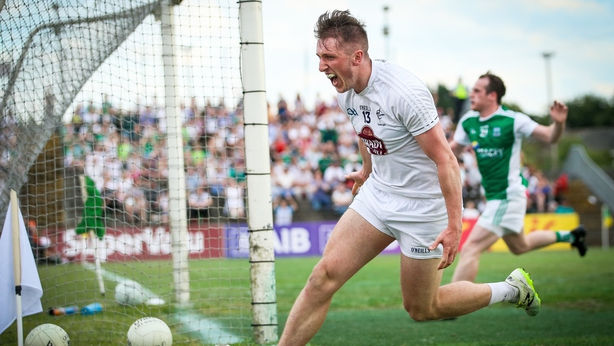 Neil Flynn finished off the move of the game Fergal Conway with the vision again sent another direct ball similar to Kildare's first this time Moolick flicked it to the on rushing Doyle who found Flynn at the back post to finish.

Champagne football from the Lilywhites who could now ease off and slow the game down and take off weary legs, both midfielders and impressive Flynn’s replaced with a quarter of an hour to play.

Fermanagh took advantage to fire over six points on the trot during the lull in the second period. Barry Mulrone from half back and replacements of their own Tomás Corrigan and Seán Quigley between them they finished with five points from play.

However, having used the full compliment of substitutes as Lee Cullen hobbled off and Fermanagh finished with fourteen men and the allowed the opportunity for Kildare to finish strongly.

The Lilies will gladly take that momentum with them to the inaugural Super 8s.