This Saturday’s Round 4 All-Ireland SFC qualifier between Roscommon and Armagh at O'Moore Park, Portlaoise will be broadcast live on the RTÉ News Now channel from 2.45pm.

Michael Lyster will be joined by Colm O'Rourke and Michael Meehan for live coverage on The Saturday Game with commentary from Marty Morrissey and Kevin Cassidy. Throw-in is at 3pm.

Commentary again comes from Marty Morrissey, who will have Michael Duignan for company. Throw-in is at 3pm.

Des Cahill and guests Ciaran Whelan, Derek McGrath and Tomás Ó Sé will analayse all the weekend’s highlights on The Sunday Game at 9.30pm on RTÉ2 that night. 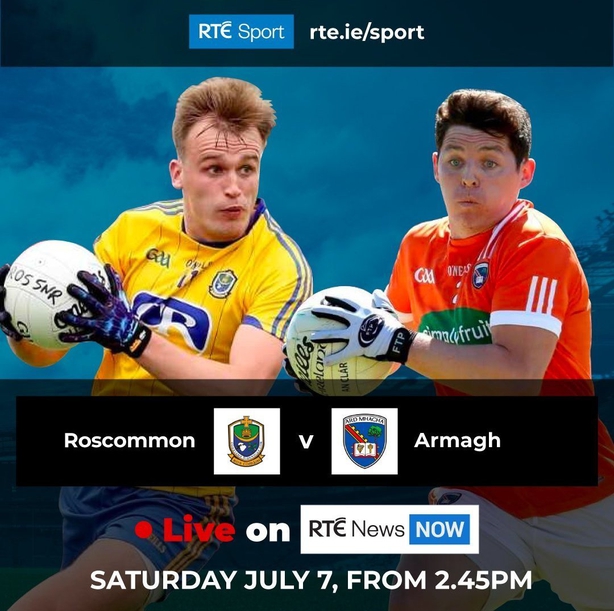 Live coverage of the Dubai Duty Free Irish Open from Ballyliffin in Donegal also continues on Saturday (RTÉ One) and Sunday (RTÉ2) with Hugh Cahill joined by John McHenry for coverage of the final two rounds.

Saturday Sport at 2.45pm on RTÉ Radio 1 presented by Joanne Cantwell, Des Cahill and John Murray will have live commentary of the day’s Championship action including Round 4 of the Football qualifiers, Golf from the Irish Open and Tennis from Wimbledon.

Sunday Sport at 2pm on RTÉ Radio 1 presented by Darren Frehill and Jacqui Hurley will have live commentary from Semple Stadium, Thurles of Kilkenny v Galway in the Leinster SHC final replay plus Irish Open Golf and tennis from Wimbledon.