Kilkenny produced a trademark late rally to earn a replay against Galway in a gripping drawn Leinster hurling final.

The All-Ireland champions led by two points heading into stoppage-time but after Hurler of the Year Joe Canning missed a free from the sideline, superb points from Enda Morrissey and TJ Reid ensured the sides will meet again next Sunday in Thurles with the throw-in time to be confirmed.

Galway were not at their free-flowing peak yet still looked to have done enough as Niall Burke, Conor Whelan and Cathal Mannion scored nine between them from play, but Kilkenny showed great grit and stayed in touch with frees from Reid before pulling off a great escape.

It was a strange, spluttering first half. 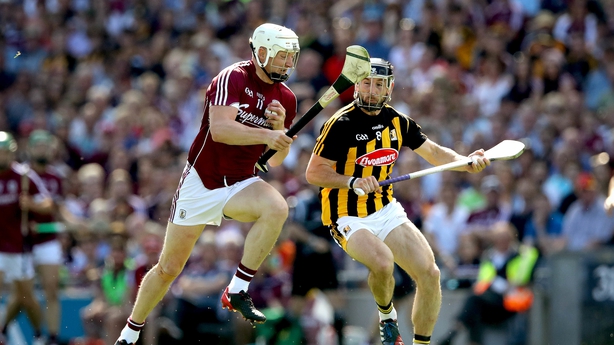 There was aggression and some fine fielding, particularly from Kilkenny’s Padraig Walsh, who was like a man possessed in the full-back line.

But there were also miscontrolled passes and wayward shooting - the Cats sending eight off target by the interval.

The sight of a player of Reid’s talent hitting a sideline ball straight out of play to the opposite wing on the quarter hour summed up the quality of the contest.

Kilkenny lined up with just three forwards at times and Galway had an inside line of Conor Whelan and Conor Cooney.

That made for a defensive scrappy battle, swarms of players quickly descending on any attempt to gather a loose ball.

Kilkenny’s Billy Ryan must have thought his dreams had come true when presented with a scoring chance 15 seconds into his Championship debut but he put it wide.

"An arm wrestle has its attractions... It shows the power of these teams and the suspicion that they're the two best teams in the country" pic.twitter.com/6LQdz1zuEW

The Graigue-Ballycan man was to make amends though, scoring two fine points from play before the break.

The rest of their scores in the half, bar one from Reid, came from frees, TJ adding to dispatching four and Eoin Murphy one, though they could have had a goal if Ger Aylward had picked out the umarked Ryan rather than sending a tame shot at James Skehill in the 28th minute.

Galway’s Niall Burke matched Ryan’s total and Joe Cooney, Whelan and Joe Canning (2f) all chipped in but the All-Ireland champions were struggling to find their form, conceding the last two scores to trail 0-08 to 0-07 at half-time.

Galway upped the intensity after the restart, Whelan drawing a great save from Murphy and Canning converting the resulting 65.

Joe got his only point of the day from play after Walter Walsh was denied what looked a blatant free but missed a few placed balls in an uncharacteristically low-key performance.

Niall Burke and Cathal Mannion both landed fine efforts as Galway edged two clear after both sides missed goal chances in the  50th minute – Reid denied by Skehill after a delightful feint, flick and shot and a Canning pass being cut out just in front of the posts.

Conor Whelan hangs in the air to pull off a spectacular catch during a scrappy first half - Watch the highlights at 9.30pm on RTÉ 2 tonight pic.twitter.com/KsLo0hkrKo

Galway looked to have taken control when they went three clear approaching the hour – 0-15 to 0-12 – but Walsh and a Reid free kept them in touch and the Kilkenny fans found their voice.

Canning worked hard to block down a clearance and set up Niall Burke for a fabulous score from the sideline and Galway were three up again with two minutes to play when Joseph Cooney picked off the puckout.

Richie Hogan was on the pitch at this stage though and, after John Donnelly cut the gap, the former Hurler of the Year picked out wing-back Enda Morrissey with a perfect crossfield pass. Morrissey steadied himself and reduced the margin to one.

Into the second minute of added time and who else would you want to try and level it from 65 metres out on the sideline?

As Joe did against Tipperary last year so did TJ today and Kilkenny remain in the hunt to regain the Leinster title.

TJ Reid brings the Leinster Final to a replay after a dramatic equaliser in the injury-time - Watch the highlights at 9.30pm on RTÉ 2 tonight pic.twitter.com/nyMI1oQL5I