Galway captain David Burke believes the teams coming out of a stunningly competitive Munster championship will be sharper than ever and primed for a thunderous charge for Liam MacCarthy.

The introduction of the round-robin format in the provinces has seen Munster in particular serve up some unbelievable fare.

The strength of all the counties made for a dog-eat-dog series of fixtures, with Burke conceding that Leinster, although sprinkled with some fine battles of its own, was not quite on the same level.

"As players we found [the round-robin games] brilliant," he told RTÉ Sport. "It was a great idea. It was a test for every management team and every squad to see how they'd approach it.

"There's been good quality games in Leinster as well, it's been tough, but with the five top teams in Munster it has been tough going on them.

"The teams that have been playing well and have earned their crust have qualified. Fair play to them. They are going to be serious outfits. Come All-Ireland semi-finals, they'll be serious outfits going forward.

"But look, we're in a Leinster final against Kilkenny, that's our priority. I'm really looking forward to it."

That showdown with the Cats comes on Sunday and the Tribesmen are expected to take the glory.

Micheál Donoghue's All-Ireland champions are purring; a month ago they easily dealt with Brian Cody's men in a 1-22 to 2-11 Salthill victory. 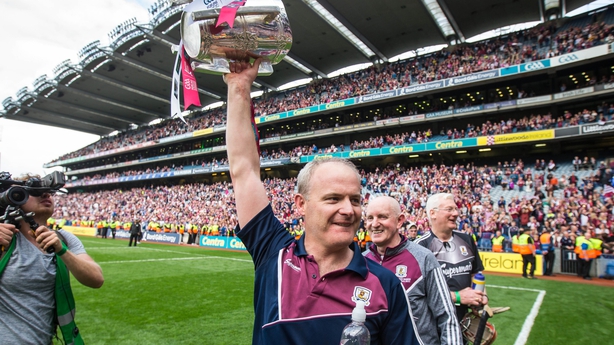 Burke is taking nothing for granted.

"There are new players that have come into the squad, they've driven on training. Other players that are mad to get into the team have driven it on. The whole squad have been pushing. That's the key."

Manager Donoghue echoed those sentiments as he braced himself for a different animal.

"Obviously, we've taken a lot of confidence out of winning all our games but that's in the past now," he said.

"We're expecting a completely different game. Kilkenny have had a good win against Wexford; their tails are up.

"We've taken a lot of confidence from the win last year and I think that's evident enough in our play to date.

"We're back in the Leinster final again and we want to go and give a good performance. That's down to the group; how committed they are, how focused they are. It was easy to get them back on track [after winning the All-Ireland]."

Follow the Leinster and Munster SHC finals this weekend via our live blogs on RTÉ.ie and the News Now App, watch live on RTÉ2’s The Sunday Game (from 2pm) or listen to commentary on RTÉ Radio 1's Sunday Sport.