Donegal strolled to a ninth Ulster SFC crown against Fermanagh, whose wait for a first ever provincial title continues.

Eoghan Bán Gallagher and Ryan McHugh grabbed goals as Declan Bonner’s side built up a 2-7 to 0-5 lead by the half-way stage.

Donegal’s class was written in bold print all over this decider, with a brave Erne challenge coming nowhere near to causing the shock their fanatical followers had yearned for. 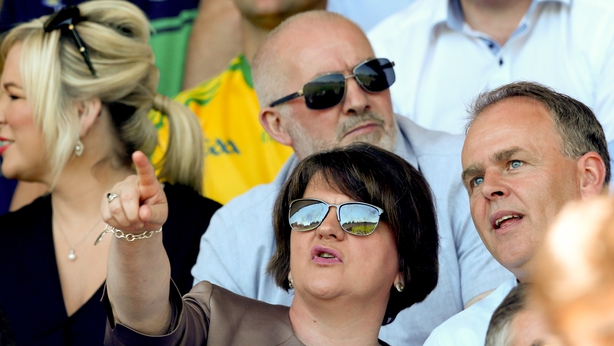 DUP leader Arlene Foster arrived on cue for her first Gaelic football match, and each and every other Lakeland inhabitant seemed to have been there to turn the Clones amphitheatre into a sea of green.

Seán Quigley got the Erne men off the mark from a free, but as they pressed patiently in search of openings, a packed Donegal defence was able to force turnovers and break at speed from deep.

After Odhrán MacNiallais had curled over their opener, Michael Langan galloped through the middle to pick off a point, and the men from the north-west were beginning to move with menace.

Corner back Eoghan Bán Gallagher had been jumping at every opportunity to use his pace in finding pockets in the Fermanagh defence, and in the 16thminute he hit he jackpot, getting on the end of a move involving Paddy McBrearty and Ryan McHugh to palm to the net at the far post.

'Donegal are a team of the future...there is an All-Ireland in that team in the next few years’ - Colm O'Rourke on Declan Bonner's new-look Donegal team pic.twitter.com/5PQg3YmSdZ

Forcing Fermanagh to go long with their kick-outs, Donegal dominated possession around the middle, with MacNiallais a valuable ball-winner, along with Hugh McFadden.

Gallagher was enjoying the freedom he found in the Clones sunshine, and slotted over a point, with Michael Murphy adding interest from a 50 metre free.

Eoin Donnelly shrugged off a couple of tackles to steer over a point at the other end to revive Erne spirits, but in the 31st minute, McHugh dodged his way past a despairing Kane Connor to send a rocket to the roof of the net for an eight points lead. 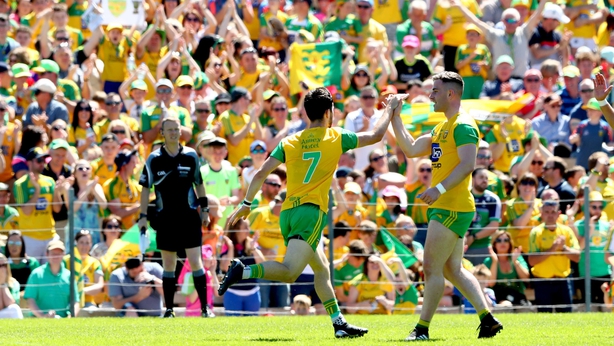 This was the sort of scenario that Fermanagh’s carefully constructed plan was not calibrated to deal with, and they were forced to improvise as a shaky Plan B was called for.

But they lacked the firepower up front to trouble a well organised Donegal defence, although Ciarán Corrigan did claim a neat score.

McBrearty and Murphy rounded off the first half scoring to send rampant Donegal in with a 2-7 to 0-5 interval lead.

The introduction of Seamie Quigley gave Fermanagh fresh impetus, and after landing a superb score, he forced Shaun Potton into a point blank save

But as Rory Gallagher ordered his troops forward Donegal were able to find more openings at the back, and Jamie Brennan crossed for Paddy McGrath to palm to the net, but he was penalised for a square ball infringement.

Conall Jones and Barry Mulrone gave Fermanagh fresh hope with scores, but they had to play the final quarter with 14 men after midfielder Ryan Jones was booked for a second time.

The scores flowed from Ciarán Thompson, Paddy McGrath, Cian Mulligan and Jamie Brennan, and while substitute Quigley added a couple for the Erne men, this was to be Donegal’s day as they lifted the Anglo-Celt Cup for the first time since 2014.