Since the draw was made at the start of the year, this game has stood out to me.

It’s a massive match. The winner is guaranteed a Munster final.

Clare had been waiting for a big win since the All-Ireland final in 2013. They got that in dramatic circumstances against Tipperary last week.

The neighbours Limerick are coming to town and they’ll give them a warm welcome in Cusack Park.

But Limerick are really playing well.

They’re the form team, along with Galway. They’ve been brilliant all year and I really fancy them to win this one, but it’s going to be really tight.

Podge Collins came on last week, we saw Shane O’Donnell and Tony Kelly leading the line, Clare have a lot of talent.

But I think Limerick are better balanced and stronger at the back. I think that will get them over the line. 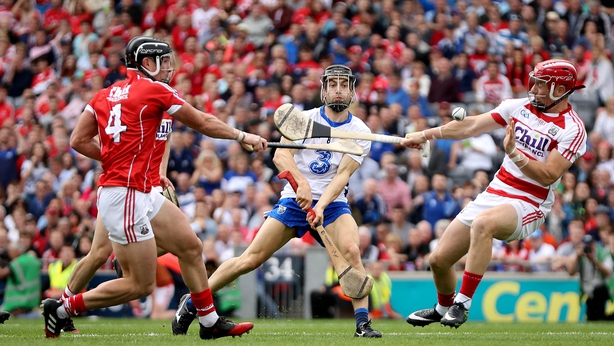 Waterford not being able to qualify makes it easier for Cork but they still have to be on their guard.

You couldn’t make up the way the year worked out for Waterford. They had no home matches, the injury list they got was just incredible and then the phantom goal in Limerick.

So everything went against them but there are two little things that might bring a big performance out of them on Sunday.

Michael ‘Brick’ Walsh will be playing his 74th Championship match, breaking the all-time record of Brendan Cummins, which is a massive achievement for an outfield player.

He’s won All-Stars as a back, midfielder and forward and has been one of the outstanding players of the last 15/20 years.

It’s also looking most likely that it’s going to be Derek McGrath’s last match in charge.

So I think the players are going to be motivated to go out on a high, and they still have a lot of very good players.

Cork will have to be wary and approach it as normal. It’s a big game for them. If they win, they’re in the Munster final.

They’ve been playing really well. Their young players from last year have matured and Patrick Horgan is still leading the line.

I expect them to win it but they better be on their guard because Waterford will want to go out with a big performance.