Fourteen-man Donegal reached the Ulster SFC final with a facile 2-22 to 1-12 win over Down at Clones.

Despite the dismissal of full back Neil McGee after just 11 minutes, Declan Bonner’s men bossed the contest and were never in trouble against a Down side that failed to push their game anywhere near the realms of championship intensity.

Leo McLoone and Jamie Brennan hit the net, and they could have had a couple more goals as they cruised to an intriguing provincial decider on June 24 against a Fermanagh side managed by former Tir Chonaill boss Rory Gallagher.

In front of a crowd of 12,051, a confident and comfortable opening saw Declan Bonner’s side ease ahead with scores from Paul Brennan and Michael Murphy (free).

It looked like a routine mission for the men from the north-west as Paddy McBrearty curled over a 45 metre free, and Caolan Ward popped over a well worked score for a four points advantage.

But they lost full-back Neil McGee to a straight red card after just 12 minutes for a challenge on Connaire Harrison, ending a fractious duel which had already seen both men booked. 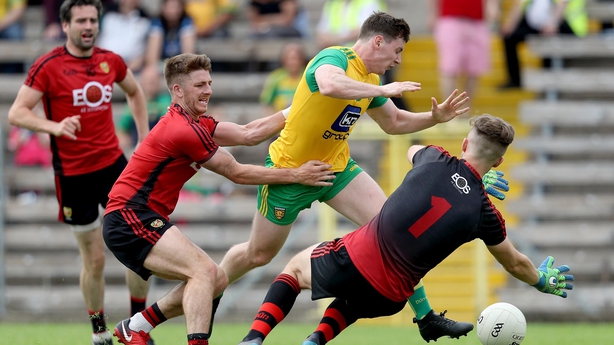 Murphy and McBrearty, both operating in a potent inside line, tagged on a couple of points as the Mourne men struggled to make anything of their numerical advantage.

And in the 22nd minute, a Ciaran Thompson effort came back off a post and into the grasp of Leo McLoone, who blasted to the net.

Donegal led by 1-8 to no score, with the Mourne men finally opening their account in the 25th minute through wing back Caolan Mooney.

Harrison was now able to find more space, and knocked over a couple of scores, with Donal O’Hare also on target for the Mourne men as they closed the gap, with Peter Turley working hard around the middle.

Harrison used his power to bang over his third score, but Donegal eased to the halfway stage with well worked scores from Ryan McHugh, Jamie Brennan and Ciaran Thompson to lead by 1-12 to 0-7 at the interval.

As they switched the point of attack, Donegal began to find more openings in a creaking Down rearguard, and a superb Murphy effort was followed by two trademark McBrearty scores.

And in the 45th minute came the almost inevitable second goal. Murphy won the ball, and after Thompson and McHugh had combined sweetly, Jamie Brennan was left to tap the ball to an empty net. 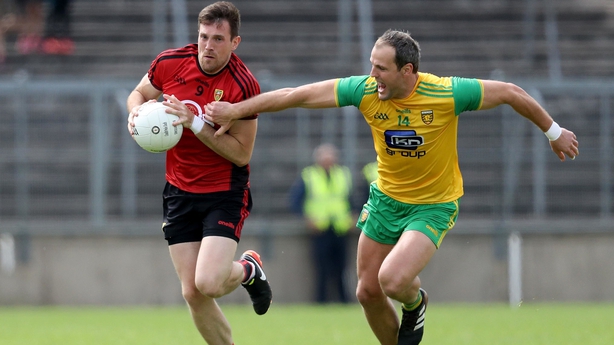 With a 15 points lead, Donegal were in an almost embarrassingly positive position, and they remained solid at the back, conceding just two scores in the third quarter, to O’Hare (free) and Harrison, Down’s only genuine scoring threat.

McBrearty almost had a third goal, but his effort came back off the butt of a post, and they missed another goal chance when Stephen McMenamin palmed over the bar with the net gaping.

Down came close too in a rare moment of positivity, with O’Hare bringing a super save from Shaun Patton, who kept out his shot with a trailing right boot.

But they did get that consolation goal deep into injury time when Niall Donnelly drilled to the net with the very last kick of the game.