In a tale of contrasting fortunes, Clare flourished while Waterford floundered as Cusack Park welcomed its first Munster Senior Hurling Championship tie in 21 years in front of 13,736 this afternoon.

A chastened home side, following their disappointing five point reverse to Cork seven days earlier, produced the perfect response full of intensity and purpose, with inspirational targetman John Conlon (1-3), Tony Kelly (0-6) and 1-10 from Peter Duggan placed balls demonstrating that backlash on the scoreboard.

Already without Austin Gleeson and Pauric Mahony, the Deise also saw Tadgh de Burca, Noel Connors, Darragh Fives and Barry Coughlan succumb to injury at varying stages while captain Kevin Moran was given a straight red card for a high challenge on Tony Kelly by the three-quarter mark.

With the wind at their backs, Waterford did settle into their stride thanks in the main to a ninth minute goal from Maurice Shanahan who was perfectly positioned to fire home a rebound after Tom Devine's initial shot was saved by goalkeeper Donal Tuohy at 1-4 to 0-3. 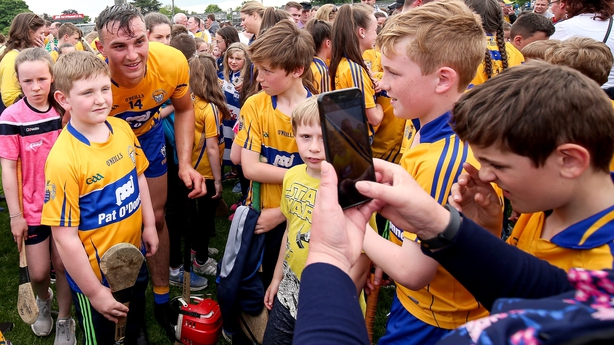 However, the loss of de Burca allied to a 17th minute John Conlon-earned penalty saw the momentum shifted irrevocably in Clare's favour thereafter as Peter Duggan stepped up to rifle to the top left corner of the net.

Suddenly, Clare sparked into life, epitomised by a Shane O'Donnell dispossessing shoulder on Barry Coughlan that resulted in a point for the Éire Óg forward and lifted the crowd substantially. Two minutes later, John Conlon bulldozed his way past two defenders for Clare's second goal while a further four point rally without reply, three from Duggan, put the hosts 2-10 to 1-06 clear by the 32nd minute.

Waterford did hit back with points from Tom Devine, Maurice Shanahan and Kevin Moran to lessen the half-time damage to five at 2-11 to 1-09. However, early retirements for defensive trio Noel Connors, Darragh Fives and Barry Coughlan soon quenched Waterford's hopes as the second half developed.

A 42nd minute goal from substitute Tommy Ryan did wipe out Clare's early blitz from Kelly (2) and Conlon but following the dismissal of captain Kevin Moran, it would prove merely a damage limitation exercise from Derek McGrath's side despite a strong showing from Stephen Bennett. 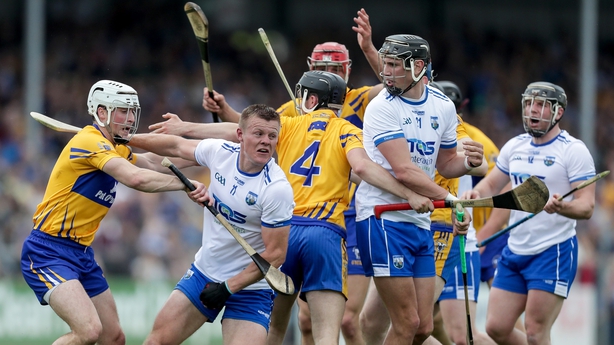 Increased indiscipline allowed Peter Duggan to flesh out the home side's advantage while Tony Kelly and Colm Galvin also surged to the fore to ensure that Clare finally kickstarted their championship bid in rousing fashion.