By Francis Mooney at Brewster Park

Fermanagh sent Armagh crashing out of the Ulster SFC with a battling win at Brewster Park.

Fourteen-man Armagh failed to compete in the second half against a dogged Erne side that achieved a rare provincial victory over the Orchard through discipline and hard work as they set up a semi-final date with either Tyrone or Monaghan.

Seamus Quigley’s return to the fold this season continues to bear fruit, and he top-scored with 0-6 as Rory Gallagher’s side saw out a dogged encounter.

Armagh lost midfielder Niall Grimley to a straight red card at the start of the second half, and their already faltering challenge was doomed to failure thereafter.

For the first time in 22 years, Armagh went into championship battle without a Crossmaglen player in their ranks, and in front of a crowd of 8,421, they had an early let-off when a Sean Quigley effort dropped down off a post into the hands of brother Seamus, whose shot was saved at close range by Blaine Hughes. 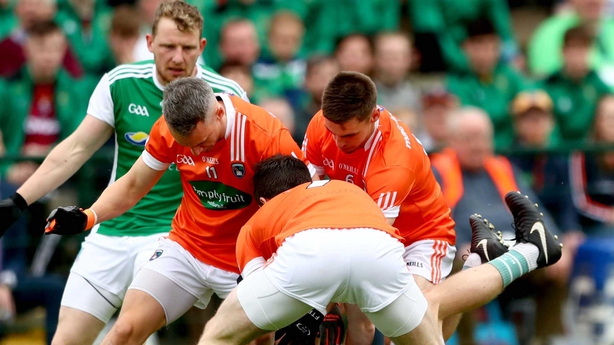 The Erne men were able to find pockets of space to exploit, and Declan McCusker was give acres of ground to slot over with ease.

Armagh’s opener from Mark Shields prompted another response, with Barry Mulrone and Ryan Jones both comfortably shrugging off challenges to steer over points for a 0-4 to 0-1 lead.

Ethan Rafferty was the go-to man for an Orchard side desperate to get into a game in which their workrate was coming second best, and he kicked a 48 metre free, and a fine effort from play to close the gap to one.

But defensive lapses continued to dog Kieran McGeeney’s side, though a wasteful Fermanagh failed to punish, despite the solid midfield platform provided by skipper Eoin Donnelly and Jones, and the direct running of Declan McCusker.

Fermanagh were supremely effective in channelling bodies back to stifle Armagh’s offensive breaks, and the visitors managed just one point in the second quatyer, a Gavin McParland free.

As emotions ran high, Armagh selector Paddy McKeever was dismissed to the stand, and at the break, a disciplined and hard-working Fermanagh led by 0-6 to 0-4.

Armagh suffered a severe blow inside two minutes of the restart when midfielder Niall Grim*ley received a straight red card for an elbow into the jaw of Sean Quigley, and they went further behind when the Quigley brothers both hit the target. 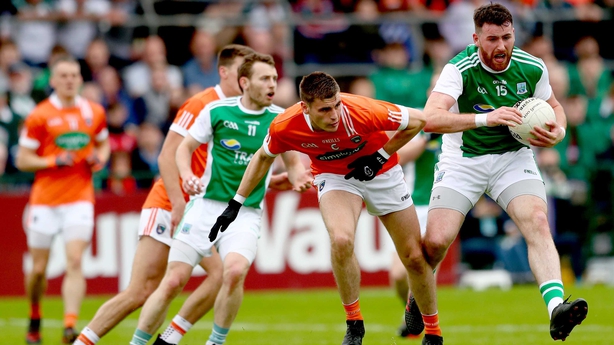 McCusker and Kane Connor combined to send Lee Cullen in for a point and a 0-9 to 0-4 lead by the 45th minute, as they went for an increasingly expansive approach to stretch their short-handed opponents, the input of Paul McCusker invaluable.

Now behind by six, Armagh managed to turn the tide, winning the frees that skipper Rory Grugan, unable to start due to injury, converted.

They continued to press but were dogged by a series of bad wides, and after surviving a spell of heavy pressure, thanks to solid defending from Che Cullen and Barry Mulrone, Fermanagh countered for Quigley to add a couple more to his tally, including a fisted point, his only score from play.

Armagh had failed to register from play since the 17th minute, and their challenge ran out of steam in the fading Enniskillen light.