Oisin McConville believes Monaghan will end their "mental block" when it comes to facing Tyrone and dump Mickey Harte's men out of the Ulster Championship.

The Farney County come into this Sunday's provincial quarter-final off the back of another strong Allianz Football League Division 1 campaign in which they beat Dublin and narrowly missed out on a place in the final.

Tyrone are the reigning champions, but former Armagh forward McConville feels they're on the wane, and predicted they'll coem up short in Omagh when Monaghan come to town.

"There's a lot on the line at the weekend," he told RTÉ Game On.

"It's a long road to those Super 8s for whoever loses at the weekend. I've fancied Monaghan.

"I saw them during the league. I think they've managed, for the first time ever, to stay in Division 1 and hold a little bit back. They had the opportunity to rest a few players.

"There's a lot of players going into this championship a lot fresher than they have been. I just have a sneaking suspicion for Monaghan; I fancy them to win the Ulster Championship.

"Monaghan have a shocking record against Tyrone. They seem to have a mental block when it comes to playing against them. They'll have to turn that around.

"The strange thing about it all is that they don't have a mental block when it comes to Dublin. They've taken on Dublin over the last number of years in the league and gone toe to toe. They've added to their forward line." 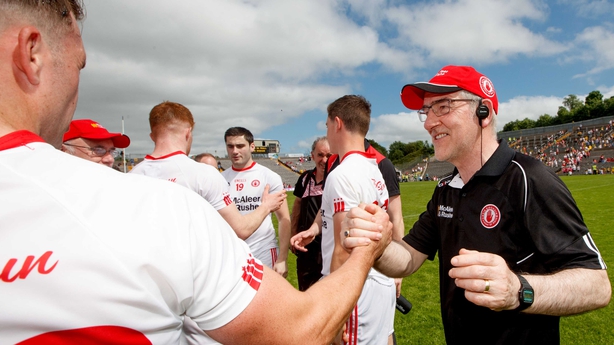 McConville sees improvements in the Farney ranks but suspects the Red Hands have stalled in their progress.

Key to Malachy O'Rourke's hopes will be stopping Tyrone's danger men. Do that, says McConville, and this Tyrone side's weaknesses will be exposed.

"Tiernan McCann and Mattie Donnelly are two of the players when you're playing against Tyrone that you have to got to pinpoint.

"They're the guys who are breaking the line the majority of the time. Niall Sludden is another guy you have to man-mark.

"The thing that's stood to Tyrone the last number of years is that they've really good footballers who are comfortable on the ball and comfortable playing the system, and they haven't had much of a contest in Ulster. I think that may have changed a little but.

"I'm not sure if Tyrone have improved that much, I'm not sure where their confidence is at and if they lose Lee Brennan they have a serious problem with free-kicks."