Kilkenny were made to sweat in the closing stages by a never-say-die Cork but they just held out to claim their third Littlewoods Ireland Camogie League Division 1 title in a row at a packed Nowlan Park.

This was a fourth crown in five seasons for the Noresiders and a 14th in total. In the process, they inflicted a third defeat on their old rivals from their last four meetings in major finals going back to the 2016 All-Ireland.

It also gives Cork the unenviable record of having lost the most Division 1 Finals, although their ninth reverse comes with a record total of 16 wins.

While they only had a point to spare at the end and failed to score in the final quarter, it would be hard to argue that Kilkenny weren’t worthy vicotrs, having led throughout.

They were relentless early on but the manner in which they allowed a 10- point lead slip will concern Ann Downey, making sure that there is plenty to work on ahead of the Championship.

"We had a brilliant first half" said the winning captain, Shelly Farrell, the silverware dangling from her right hand.

"We really gave it everything in the first 20 minutes, we went all at it. I don’t know, did we sit back a bit with the lead after that.

"We came back in the second half and tried to keep going. I know it was a point in the end but we fought all the way and it was brilliant to win." 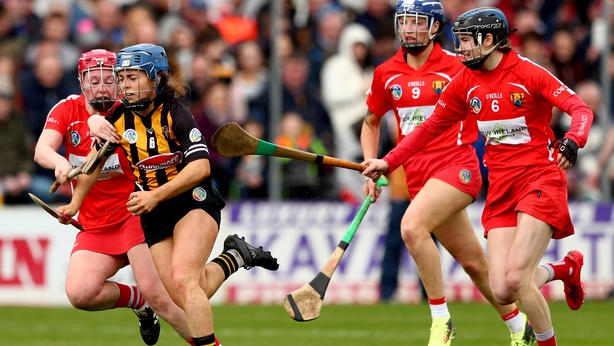 For the second year running, Paudie Murray will be frustrated by his side’s lethargy in the opening gambits.

Twelve months ago, Denise Gaule had a goal within minutes of the throw-in. This time, Kilkenny were Frankelesque in the manner in which they flew out of the stalls.

Taking 10 minutes to score might not sound the end of the world, but when Orla Cotter converted a free for Cork, a majestic Kilkenny already had eight points on the board.

The Rebels had no answer to the power and movement of their opponents’ attack. More than that, the Black and Ambers showed far greater aggression and urgency, emerging from most of the rucks with possession and reacting first to the majority of the breaks.

Miriam Walshe, Jenny Clifford and Katie Power were prominent in general play, while Gaule was accurate from placed balls.

Gaule and Anne Dalton also gave Kilkenny supremacy around the middle and Cork were unable to get out of their own half.

Meighan Farrell was an absolute rock at centre-back on the rare occasion that the All-Ireland champions did manage to make progress and Kilkenny move inexorably clear by 0-11 to 0-1.

There were signs of an improvement in the final 10 minutes of the opening period. Linda Collins and Niamh McCarthy were living off scraps in Cork’s two-player inside line but the former did look dangerous and hit two points from play, including one from tight on the right, as the Reds managed to stem the bleeding and go in at the break trailing by just 0-12 to 0-5. 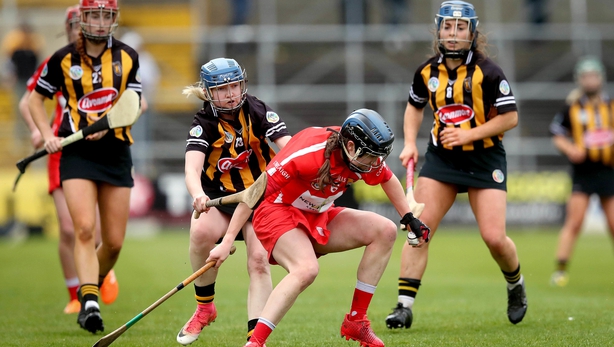 For the second half, Ashling Thompson reprised her regular role as an auxiliary centre-back to provide an extra defensive screen and give more creative freedom to Gemma O’Connor, starting her first game of the year following a knee injury.

Orla Cotter began to garner more possession around midfield and when Orla Cronin scored a brilliant solo goal seven minutes after the restart, it was game on.

Kilkenny’s response was notable though, with a couple of points from Walshe and impressive youngster Aoife Doyle immediately to maintain a six-point buffer.

A brace of points from Katrina Mackey kickstarted a last-quarter rally from Cork and had Collins found the net with her kick in the 47th minute, rather than drag the attempt wide after recovering from being fouled, they would have had real momentum.

As it was, Cotter had an easy point from the free that Ray Kelly correctly called play back for to leave just three between them.

Kilkenny had the chance to finish it in the 54th minute but Thompson saved Denise Gaule’s shot from a penalty. 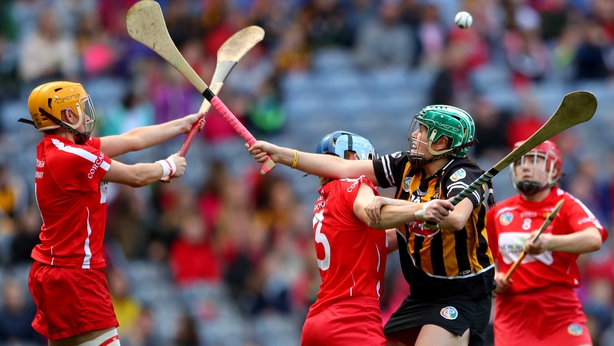 It came as a result of a sublime bit of skill by Anne Dalton around midfield, the St Lachtain’s star effecting a foot solo to maintain possession and get a move going up the left flank.

The sliotar ended with Shelly Farrell, who was unceremoniously upended by Aoife Murray and Kelly had no option but to show the Cork skipper a red card.

The Cats were unable to make the extra player count though. Collins flashed a shot inches over the crossbar and Cotter converted a free to leave just the minimum between them.

They could not fashion the last chance they needed though and Kilkenny prevailed.