The teams will meet again in the first round of the Munster championship at the end of May, but this clash had plenty of the bite and sharp hurling that the summer will surely bring.

Limerick had hit the last four points of normal time as the game ended level at 0-26 each, but a John McGrath point was added to by Forde when he intercepted Nicky Quaid’s puck-out, before he flicked a second to the net eight minutes later to seal the win, despite Graeme Mulcahy’s late strike for Limerick.

In front of 12,006 supporters there was a late throw in to this game due to extra-time in the schools final, but the delay didn’t seem to hamper Tipperary’s start as points from UL teammates John McGrath and Jason Forde had Michael Ryan’s side 0-2 to 0-0 ahead after three minutes. 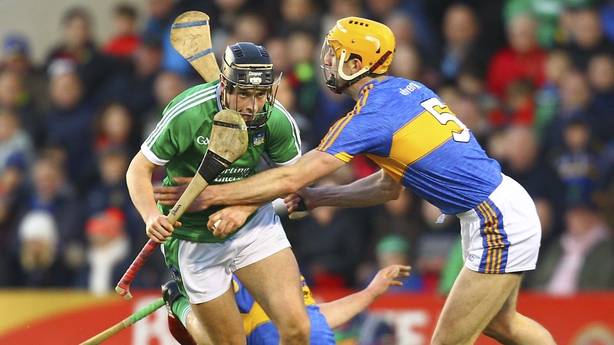 Worryingly for Limerick sharpshooter Aaron Gillane had to receive lengthy treatment for an ankle injury early on, but with his foot heavily strapped he stepped up to get Limerick on the board with a fourth minute free.

Ronan Maher converted a sideline cut from a huge distance after seven minutes but made it look easy from the right. At the other end Gearoid Hegarty picked out Seamus Flanagan with a lovely square pass to score, while a Gillane point from play was followed by a 65 from the same player to level matters after 16 minutes.

Four points in as many minutes put Tipperary in control and the fluidity of their play that saw Barry Heffernan, Willie Connors and Micheal Breen all shoot their opening scores identified a slackness at the back for Limerick.

But from there to the break the Limerick backs upped their performance. Diarmuid Byrnes and Dan Morrissey typified that effort in the half-back line, although the crude pull down from Richie English, which denied Forde a certain goal ten minutes from the break was an ugly moment.

Ronan Maher pointed from distance nine minutes for the break to restore Tipperary’s four-point cushion, but some slick play from the Limerick forwards saw them pull level – the long crossfield passing from Gillane and Flanagan for Kyle Hayes’s point was a sight to behold.

Tipperary have beaten Limerick in the Allianz Hurling League, and see themselves in the Final next weekend. Watch the Full-Time Highlights here on GAANOW! pic.twitter.com/ECrK7WJZ0K

But the Tipp forwards are hard to silence for long periods and they closed the half with points from Ronan Maher and Breen to lead by 0-12 to 0-10 at the interval.

Limerick would have been annoyed with the conversion rate in the first-half with six wides and another five efforts dropped short, while Tipp were hugely efficient with 12 points from 13 scoring chances – their only miss was a Ronan Maher sideline cut.

And that return continued after the restart as two successful Forde frees stretched Tipp’s lead to four points, although points from Flanagan and Barry Murphy came to Limerick in a run of three without reply to maintain their challenge.

Both sides took turns to hold the upperhand and hit four unanswered points each, but John O’Dwyer and Sean Curran nudged Tipperary ahead with 12 minutes remaining.

Forde hit two wides in a minute, which encouraged Limerick, but John McGrath pointed and Maher hit his second sideline cut to give Tipp a three point lead.

Gillane finally succumbed to injury with nine minutes remaining, but Limerick battled to the end and hit five of the last six points to force extra-time as the game ended 0-26 each.

Jason Forde fires it into the back of the net for a second time! pic.twitter.com/2fJZ1NyHC0

But Forde struck twice in the first period of extra-time to give Tipp a strong lead to protect, and even though Mulcahy fired a cracking goal in the second period there was no way back for Limerick.