There were 14 goals and some impressive football on show throughout a pulsating TG4 All-Star exhibition match in which Ephie Fitzgerald’s 2016 team claimed bragging rights in sweltering conditions.

Just a single point separated the sides at the death, with some of Dublin’s TG4 All-Ireland winning side leading the way for the 2016 selection in 37C temperatures at the Chulalongkorn University Stadium in Bangkok.

2017 senior Players’ Player of the year Noelle Healy was one who shone brightly for the winners on the day, finishing with 3-2, while Dublin team-mates Lyndsey Davey (2) and Sinead Aherne also netted goals, along with Cork’s Orla Finn.

Armagh’s Aimee Mackin and Donegal’s Yvonne Bonner collected two goals each for the 2017 team, while Aisling Doonan, Niamh Hegarty and Niamh McEvoy found the back of the net too.

It was a game played at a remarkable pace despite the sizzling heat and one which had a mixture of everything. Not only were there some excellent score-taking, the saves on show from Ciara Trant, Martina O’Brien and Noelle Gormley were also top class.

Another interesting battle was at midfield, with Mayo’s Aileen Gilroy and Fiona McHale among those to impress as they went head-to-head.

The first quarter was an exciting one as 2016 team finished with two goals courtesy of Dublin’s star forwards.

Healy palmed into the net with just one minute on the clock while Sinéad Aherne followed suit just before the whistle sounded to make it 2-8 to 0-10.

Monaghan’s Ciara McAnespie was another to keep the scoreboard ticking over while Mackin, Doonan and Bonner were among those to split the posts for the 2017 team.

Healy was on fire once again in the second quarter, bagging two goals in quick succession before Orla Finn found the back of the net for the 2016 team’s fifth goal.

At the other end, Donegal’s Niamh Hegarty and Mackin rattled the net as the scoreboard read 5-12 to 2-15 at half-time.

On the restart and fresh from captaining DCU to Gourmet Food Parlour O’Connor Cup glory, Tipperary’s Aishling Moloney sprung to life collecting 0-3 to spur the 2016 team on. At the other end, Doonan fired home while Mackin continued to impress. 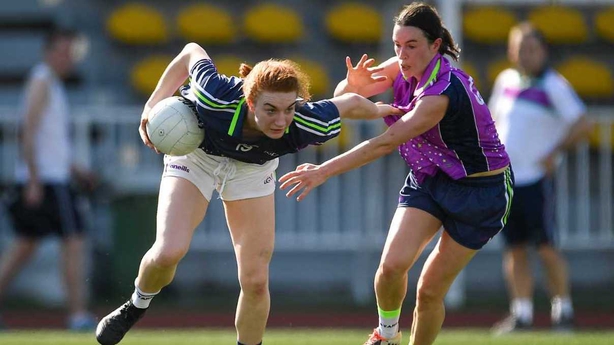 And despite the soaring temperatures, the impressive performance continued into the final quarter as players from both sides capped the goal-fest.

Lyndsey Davey accounted for two of the 2016 team’s, while Bonner, Niamh McEvoy and Mackin slotted home at the other end to close proceedings.

But it was too little, too late for Mick Bohan’s 2017 contingent as Fitzgerald’s charges held out for a narrow win.