By Eoin Brennan at Walsh Park

A second successive National Hurling League victory wasn't ultimately enough for Waterford to avoid the Division 1A relegation play-off but it will still provide plenty of positives ahead of next Sunday's showdown with Cork.

In front of a disappointing attendance of 2,656, the home side battled back from a six point deficit to lead by three by half-time, a margin that they would hold until the final whistle despite playing into a stiff breeze for the second half.

Patrick Curran was outstanding for Waterford with a handsome total of 1-13 over the 70 minutes, with Mikey Kearney also chipping in with four points from play as the home side demonstrated great character to hold out for the win.

The opening period was one of contrasting quarters, with Clare benefiting from some needless Waterford errors to establish a six-point advantage backed by eight different scorers, only to see a home revival produce a nine-point turnaround by the break.

Successive points from David Reidy, Cathal Malone and Ian Galvin helped the visitors to settle but while Waterford did respond through Curran and Conor Gleeson, a further Clare brace from Tony Kelly and Shane O'Donnell ensured a 0-7 to 0-4 lead by the 15th minute.

That advantage would be doubled in the next minute as John Conlon intercepted a Kevin Moran pass and found Clonlara club-mate Ian Galvin to pick out the unmarked Conor McGrath to billow the net at 1-8 to 0-5. 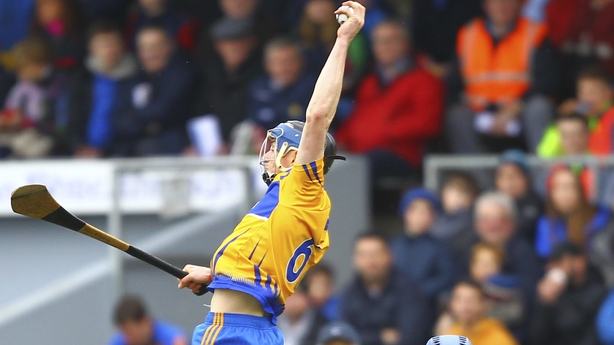 There would be a sea-change for the remainder of the half however as Waterford reshuffled their pack by pushing on Austin Gleeson as a third midfielder. Gathering momentum with with a seven point unanswered rally, five from the stick of Patrick Curran, Waterford edged ahead for the first time at 0-12 to 1-08 by the 31st minute.

David Reidy stopped the rot with Clare's first score in 15 minutes to level the tie but they would be rocked back on their heels when Patrick Curran pulled a rebound to the net after Clare goalkeeper Donal Tuohy had smothered Stephen Bennett's initial effort on their way to a 1-13 to 1-10 half-time cushion.

Clare quickly made up the ground on the restart with points from Kelly (2) and Duggan but they were unable to maintain that intensity and would find Waterford's physicality increasingly difficult to handle.

Instead, Curran and Kearney kept the scoreboard ticking over for the hosts, with three-in-a-row from the former handing Waterford a 1-21 to 1-17 lead by the 61st minute. Tony Kelly was instrumental in keeping the visitors within striking distance but two points was as close as they would get as Austin Gleeson repelled a last gasp 20 metre from Peter Duggan to cement their first home victory of 2018.

Clare meanwhile finished fourth in Division 1A to set up a Shannonside derby with Division 1B champions Limerick next Sunday, the venue to be decided by a toss of a coin.