Liam Silke, who missed out on playing for UCD in the Sigerson Cup final, was the hero for Corofin when he struck the decisive goal a minute from time to secure a deserved 1-06 to 0-06 in today's All-Ireland club SFC semi-final victory at O’Connor Park.

Corofin had to play almost the entire game with 14 men but they used all their experience to wear down the Kildare champions.

The sides were deadlocked at 0-02 each at the end of a poor opening half which exploded in the opening minute when Corofin full-forward Martin Farragher was sent off.

Referee Derek O’Mahoney dished out a red card after Farragher had fouled Liam Healy as the Moorefield full-back fielded a high ball.

Corofin were incensed by the decision as the 2015 All-Ireland champions were forced to play almost the entire game without the influential Farragher.

It took 14 minutes for the opening score of the game when Corofin’s Jason Leonard pointed from the left.

That score was cancelled out a minute later when David Whyte replied for the Kildare champions, but both teams were guilty of some bad misses.

A free from Gary Sice edged Corofin back in front nine minutes from the break before Eanna O’Connor responded for Moorefield with a close-range free.

Corofin had a golden opportunity just before the break but Michael Lundy’s low effort went just wide of the right post after he was set up by Ian Burke.

Both sides level here between Corofin and Moorefield. Watch the half-time highlights here on GAANOW pic.twitter.com/yLDK26Zpn0

Corofin made a great start to the second-half with Sice adding a free before a superb run by Dylan Wall set up Ian Burke for a fine point.

And they pushed 0-05 to 0-02 clear in the 36th minute when midfielder Ronan Steede got forward to score.

Moorefield lost Adam Tyrrell to a black card after 45 minutes but they closed the gap when O’Connor landed a free three minutes later.

Points from Aaron Mullins and the impressive James Murray levelled the game going into the final ten minutes, before another Sice free edged Corofin 0-6 to 0-05 in front.

Cian O’Connor then tied the match four minutes from time but the decisive score came when Liam Silke found the net to send Corofin into the All-Ireland final.

Liam Silke rattles the net for Corofin, See it here on GAANOW! pic.twitter.com/bOdWkwqVtw 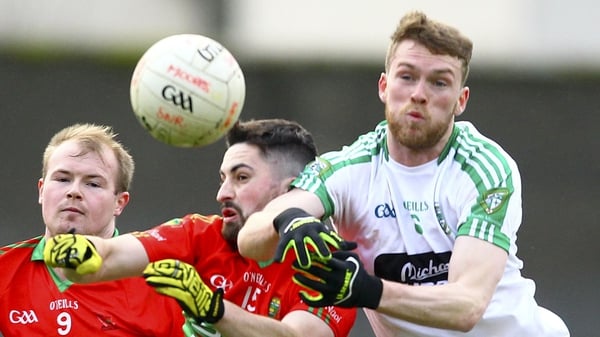