Galway maintained their perfect start to the league with a five-point win over arch rivals Mayo in a fiery contest at Pearse Stadium.

Mayo finished with 13 men after the O’Connor brothers Cillian and Diarmuid were sent off, while Galway also had midfielder Paul Conroy dismissed.

The final quarter was interspersed with several brawls throughout the pitch as referee Anthony Nolan from Wicklow struggled to keep control.

Galway did not score for the closing 15 minutes of the opening half but still led by 1-04 to 0-05 at the break.

They made a perfect start when captain Damien Comer delivered two good points in the opening nine minutes before Mayo finally got moving. 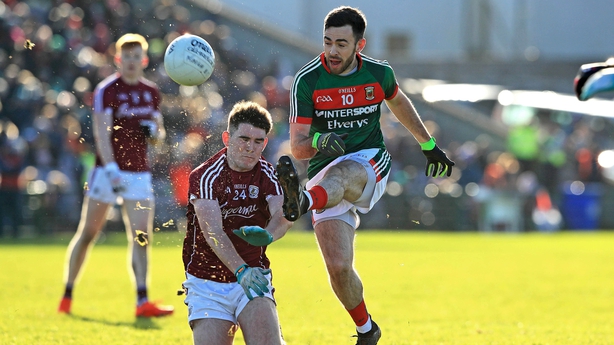 It took Stephen Rochford’s men 13 minutes to register their first score when Cillian O’Connor pointed a free from 20 metres. Shane Walsh responded for Galway and raced through to score a good point.

Kevin McLoughlin cut the gap to the minimum with a free after 18 minutes but from the restart Paul Conroy set up Barry McHugh and he raced through to fire home a good goal into the left corner of the net.

Walsh followed up with a free to push Galway into a 1-04 to 0-02 lead after 19 minutes. However, the Tribesmen failed to add to their tally for the remainder of the half.

Mayo reduced the margin when Paddy Durcan scored their first point from play after 20 minutes.

Diarmuid O’Connor found the range and then younger brother Cllian cut the margin to two in stoppage time with a free to leave them 1-04 to 0-05 adrift at the interval. 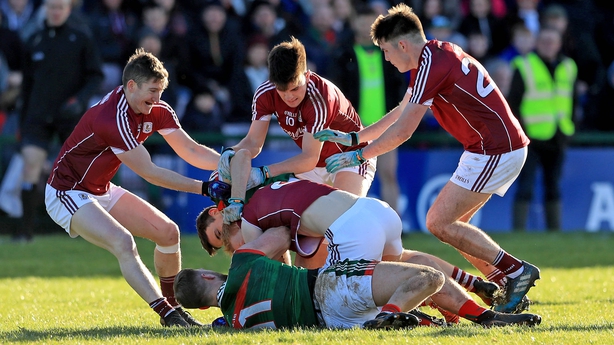 The crowd of 9,850 at the Salthill venue had a lot more to shout about in the second-half.

Paul Conroy and Colm Boyle then exchanged points but another Conroy effort for Galway, and one from McHugh pushed them five clear going into the final quarter.

Mayo struggled to get scores from play but another O’Connor free reduced the margin.

But it was Galway who responded with efforts from McHugh and Eamon Brannigan to lead by 1-11 to 0-08 with ten minutes of regular time left.

But the game disintegrated from there with several rows breaking out all over the field and red cards for both sides.

Cilian O’Connor was first to be dismissed when he got a straight red for a tackle on Eoghan Kerin, then Conroy got a second yellow for Galway to leave both teams down to 14 in the closing stages.

But it didn’t end there and Mayo lost Diarmuid O’Connor to a second yellow in the dying moments.