Galway made it two wins out of two in Allianz Football League Division 1 with a one-point win over Donegal at O'Donnell Park.

The Tribesmen have a 100 per cent record following their return to the top flight, while Donegal are also two-for-two - except Declan Bonner's men have lost both of their games.

The dynamic Damien Comer and the accuracy of Shane Walsh was the difference between the teams. Patrick McBrearty just didn't have enough help up front for the home team.

Comer was on the scoreboard on 21 seconds. He got a goal early on last week against Tyrone, but this time it was a point.

Paul Conroy added a second before McBrearty continued where he left off in Kerry with a point from a 35-metre free. By half-time McBrearty had hit six points, four from frees and two from play and largely kept Donegal in the contest.

Galway took a grip on the game on 15 minutes when Declan Kyne came forward to release Eamonn Brannigan to fire to the Donegal net and Damien Comer burst through from midfield and almost had a second, his shot going just over.

McBrearty kept Donegal in touch with two frees but Galway were four to the good on 29 minutes after two quick points from Shane Walsh, one from play. 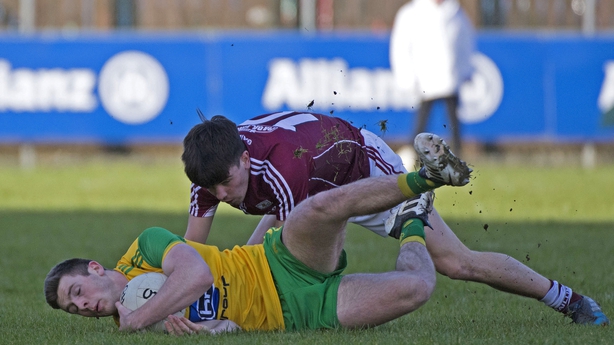 McBrearty and Walsh traded points before Donegal finished the half well with two points in the final minute from Paul Brennan and Stephen McBrearty, the last point coming after a great pass from Ryan McHugh to Patrick McBrearty, who released his brother.

There was a lively start to the second half with Stephen McBrearty pointing inside a minute and Peter Boyle denying Comer a goal at the other end a the expense of a point, while Patrick McBrearty cut the lead to one inside three minutes.

By the 42nd minute Donegal were ahead thanks to a magnificent effort from Odhrán Mac Niallais and another McBrearty free.

Shane Walsh levelled with a magnificent effort and he was then wide from close range when going for goal.

Walsh put Galway back in front but there was ten minute lull before McHugh hit a magnificent equaliser.

Within a minute Walsh edged Galway back in front from a free with seven minutes left. Ciaran McGinley fisted Donegal level but Sean Armstrong lofted Galway ahead again as Donegal were punished for mistakes.

Paul Conroy and Shane Walsh had great chances to add to the lead as Donegal were just not able to get an equaliser.

Shane Walsh with little or no room, executes a fantastic score pic.twitter.com/yW32PtCOap