Kerry's Allianz Football League Division 1 title defence got off to a winning start - but only just - in a full-blooded contest that wouldn't have looked out of place in Croke Park in August.

In an absorbing match that see-sawed throughout, Daithi Casey found the winning point in the sixth minute of additional time after Darach O'Connor's 72nd-minute goal looked like it might have nicked the win for Donegal.

That Donegal played with 14 men for three-quarters of the match spoke volumes for their resolve, and new manager Declan Bonner will be pleased with much of his team's performance when the initial disappointment rinses away.

His counterpart Eamonn Fitzmaurice can be pleased too, not least for the character his youthful team showed in the face of adversity several times through this game.

While Casey's winner will command the headlines, Kerry can be more than pleased with the performances of senior debutant Sean O'Shea, who scored seven points, and others who were wearing the senior jersey for the first time.

Last year's minor hero, David Clifford, had to battle through 49 tough minutes on his senior debut, and while he displayed a few nerves he still left his mark on a couple of scores, not least Kerry's opening goal when he set up Stephen O'Brien in the 18th minute.

With much of the drama coming in the last 10 minutes, the first half had plenty of talking points too, not least the sending off of Donegal midfielder Nathan Mullins for an off the ball kick, it appeared, on Brendan O'Sullivan that was missed by the referee but spotted by an umpire.

The Dublin native walked in the 20th minute, two minutes after Donegal were forced to replace injured goalkeeper Mark Anthony McGinley, and a minute after his replacement, Peter Boyle, was picking the ball out of the goal.

Stephen O'Brien got the final touch in the small square, after an assist from Clifford, as Kerry moved into a 1-05 to 0-04 lead. 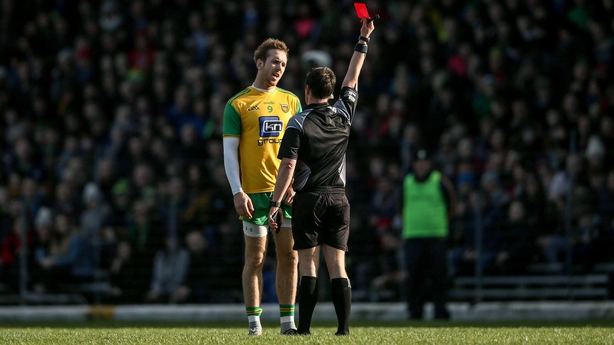 Mullins' red card threatened to derail Donegal but they dug deep and despite slipping five points behind, 1-08 to 0-06, in additional time, Paddy McBrearty fashioned two great scores before the break to make it a one-score game, 1-08 to 0-08, at half time.

Tony McClenaghan's goal a minute after the restart brought the visitors right back into the contest, and for the next 40 minutes the teams went at it in near Championship mode.

Stephen McBrearty pointed Donegal into a 1-12 to 1-11 lead after 48 minutes, and when Odhran MacNiallais finished to the net 10 minutes later to make it 2-13 to 1-13 the momentum was clearly with the 14 men.

Paul Geaney had, just a minute earlier, slashed his penalty kick over the bar, which looked costly at that stage, but when he tapped in for a goal moments after MacNiallais' green flag it was game on again.

Late points from O'Brien, O'Shea and Killian Spillane put Kerry two clear before Darach O'Connor, on as a substitute mere seconds, broke clear and looked to have won the points for Declan Bonner's side, but Sean O'Shea converted a 45-metre free and then Casey snatched victory for Kerry at the death.

In the first of a new series of podcasts, RTÉ Online Sport Editor Mikey Stafford is joined by League Sunday pundits Anthony Daly, Tomas Ó Sé, Jackie Tyrrell and Ciaran Whelan for a look through the GAA stories in the Sunday papers. League Sunday is broadcast at 9.30pm on RTÉ2.