A storming third quarter performance at Croke Park eased All-Ireland holders Dublin to a comfortable win over Kildare and a familiar position at the head of the Allianz league.

They trailed by four initially, and by two at half-time, but a 2-05 burst without reply within 16 minutes of the second-half starting all but sealed the deal.

Dean Rock and Brian Fenton grabbed the goals, both of which were expertly laid on by Bernard Brogan, while Niall Scully and Brogan also went close with opportunities.

It became all too easy for Dublin who held Kildare scoreless from play in the second-half until Daniel Flynn rifled home a consolation goal in the 73rd minute.

Man of the Match Fenton was terrific for Dublin when they needed him most, blasting 1-02 of his overall 1-03 tally early in the second-half to overturn Kildare's lead. 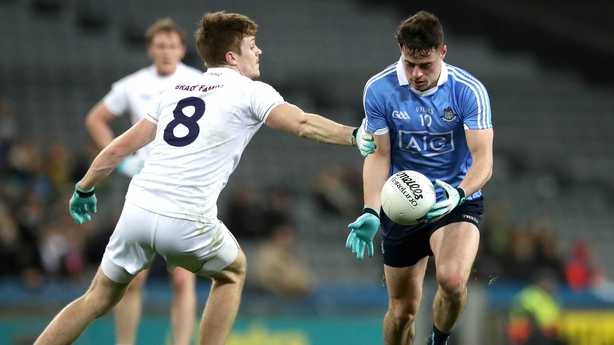 Brogan, used as an impact sub in last year's Championship, was sharp too, scoring a neat point aside from creating the goals with clever lay offs.

The versatile Brian Howard, on his first league start, weighed in with 0-2 from wing-forward while Colm Basquel hit 0-3.

Kildare were seeking a rare win at GAA Headquarters having lost all three games they played there last year including the Leinster final against Dublin.

The venue has been a thoroughly unhappy hunting ground for Lilies teams with just five wins there in their previous 22 league and Championship visits.

They couldn't have asked for a much better start as they roared four points clear after 10 minutes.

Neil Flynn, who limped off with an apparent injury after four minutes, opened the scoring seconds into the contest.

And with Dublin yet to score, Kildare added a goal in the 10th minute from debutant Luke Flynn to open up a 1-01 to 0-00 lead.

Paul Cribbin gathered up a loose ball on the right wing and sent it all the way in to the back post at the Hill 16 End for Flynn to seize on and fire home.

Dublin's response was emphatic as they reeled off five points in a row through Rock, 2, Niall Scully, Ciaran Kilkenny and Brogan to lead for the first time.

Gavin's side looked to be finding their groove but only added two more points in the half, through Kilkenny and Fenton.

Dublin beat Kildare in the opening round of the Allianz Football league. Here are the GAANOW full-time highlights! pic.twitter.com/OScmrmx12Q

Kildare, in turn, upped the ante and got back to level terms on three occasions before moving 1-06 to 0-07 clear at half-time with points from Daniel Flynn and goalkeeper Mark Donnellan.

That was as good as it got for hapless Kildare who caved in after the resumption under the weight of Dublin's incessant attacking.

Fenton and Howard, both from Raheny, contributed three points before Brogan flicked cleverly into the path of Rock for a 45th minute goal.

From the resulting kick-out, Michael Darragh Macauley worked the ball forward and Brogan this time broke it down to Fenton for another sublime finish.

Basquel and Scully added points and suddenly Dublin led by 2-12 to 1-06 and were virtually out of sight.

All Kildare could muster in the second-half was four points from frees until sub Eamonn Callaghan combined with Eoin Doyle to play in Flynn for that late goal.