Wexford manager Davy Fitzgerald said he is ‘shocked’ and ‘disappointed’ at Brian Cody’s insinuation that one of players tried to influence the referee to get Kilkenny players sent-off.

After the sending off of Richie Reid, Cody was sent to the stands following an altercation with a linesman during Wexford’s Walsh Cup final success at the weekend, but afterwards he hit out at a Wexford player ‘roaring and bawling to the referee about his helmet’.

Cody also said he thought the sending off of Reid when he pulled off Matthew O’Hanlon’s helmet was a ‘very horrible circumstance’, and Fitzgerald said he was stunned by the Kilkenny manager’s comments.

"I am just very surprised at Brian’s attitude afterwards, very surprised. I could say a lot but I am not going to go on," said Fitzgerald.

"It often happens (that we get upset) believe it or not. I am a bit disappointed in the way he was. He hasn’t lost that often in the last 15 or 20 years.

"I am bit disappointed and I don’t think there is any need for that. But he has to say what he has to say, who am I to tell him what to say or not to say?" 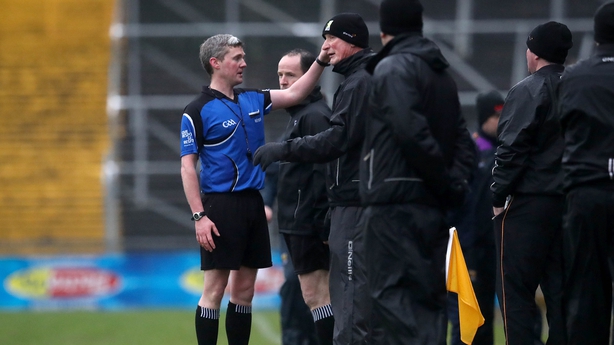 After their victory over Kilkenny in last year’s national league quarter-final and the summer’s Leinster championship semi-final, last Saturday's free-taking competition triumph was Wexford’s third success in a row against Kilkenny.

The sides will meet again in the last round of Division 1A games in March at Nowlan Park, while the provincial championship has also pitted the sides together.

Fitzgerald, speaking after the Fitzgibbon Cup tie on Monday between his LIT side and DCU in Limerick, insisted that the Kilkenny player deserved a red card for the offence and that his team know they cannot interfere with another player's helmet.

"I thought it was a good honest hard game the other day. I will just put it to you this way, I have been on the receiving ends of helmet pulling and had two or three lads sent-off in my time as manager.

"Naturally you are frustrated but that has happened to all of us. That’s what happens. If you pull a helmet you are going to get done. Back when I was manager of Clare it happened twice and we got sent-off twice.

"I am a bit disappointed in the comments. I could come out here and give you four or five things that we would be the same on, I am not going to do it."