This Sunday marks four months to the day until these neighbours clash in the Connacht Championship at the same venue, but Galway left Castlebar tonight with a dramatic 1-10 to 1-09 FBD Connacht League win.

The Tribesmen finished a rain-soaked and wind-lashed encounter with only 12 men after having substitute Damien Comer and defenders Seán Mulkerrins and Seán Andy Ó Ceallaigh sent off in the final quarter.

However, with the storm at their backs, Galway managed to keep a makeshift Mayo outfit at bay to record their second win of the competition.

Mayo manager Stephen Rochford saw his experimental team muster just 1-01 against the gale-force wind and driving rain in the second half, those scores separated by 35 minutes.

Peter Naughton had hit the net on only his second senior start four minutes into the second half to push the homeside ahead by 1-08 to 0-06.

But that was as good as it got for the home supporters in the crowd of 2,679. 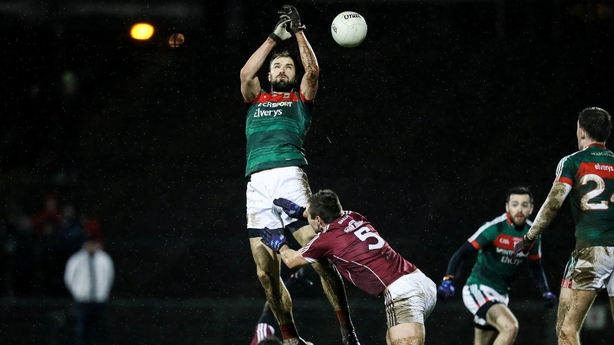 Galway had trailed at half-time by two points, but they produced a big third quarter with Galway United star Padraic Cunningham landing a couple of brilliant scores.

The game turned though on a deflected goal from Patrick Sweeney that levelled the scores (1-08 apiece) on 50 minutes.

Points from Barry McHugh (free) and sub’ Damien Comer then edged the visitors ahead.

And they managed to keep Mayo at arm’s length in the final 25 minutes despite their numerial disadvantage.

Despite shooting six wides, Mayo led at half-time by 0-08 to 0-06 after playing with the aid of the wind and rain in the opening period.

Early scores from Shane Nally and Kevin McLoughlin eased Mayo in front but well-worked points from Paul Conroy, Eoin Brannigan and Barry McHugh (free) tied the game up after a quarter of an hour.

Mayo duly kicked on again to lead by 0-07 to 0-04 on 30 minutes with Brian Reape landing three scores from distance, and they were still setting the pace at the change of ends.

But the worsening weather conditions coincided with a dramatic second half that sets the scene nicely for the teams’ National Football League clash in Salthill next month.