Tyrone made it three wins from three in Section A of the McKenna Cup with a facile 2-22 to 0-07 win over Cavan at Kingspan Breffni Park.

Peter Harte was the star of the show for the Red Hand as he contributed six points before injury ended his night midway through the second period.

Late goals from Niall Sludden and Mattie Donnelly compounded Cavan’s misery and booked a semi-final spot for Mickey Harte's side. 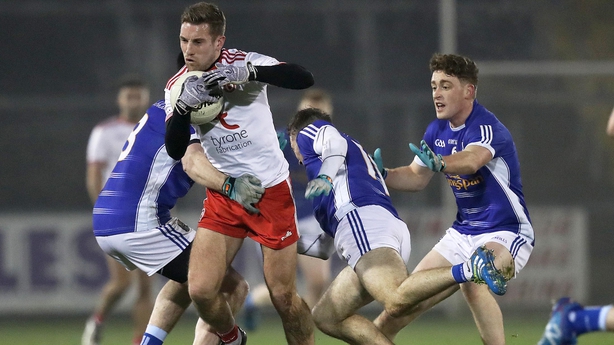 In the group’s other game St Mary’s were too good for Antrim, prevailing on a 4-08 to 0-15 scoreline at Woodlands.

Fermanagh also maintained their 100% run in Section C with a hard-fought 1-13 to 1-10 victory over Donegal in Ballybofey, a result that confirms their semi-final place.

Jamie Brennan’s goal had the home side after 20 minutes but Sean Quigley’s three-pointer helped the visitors pull away in the second half.

A late Niall Toner goal saw Derry takes the points from their clash with Down at Celtic Park, 1-14 to 2-10.

It looked as if the visitors would claim their first win of the pre-season as they led with just two minutes to play.

But Toner's goal proved the difference as the Oak Leaf county moved to the top of the standings.

The other game in the Section B ended in a 0-12 to 1-09 draw between Armagh and UUJ at the Athletic Grounds. 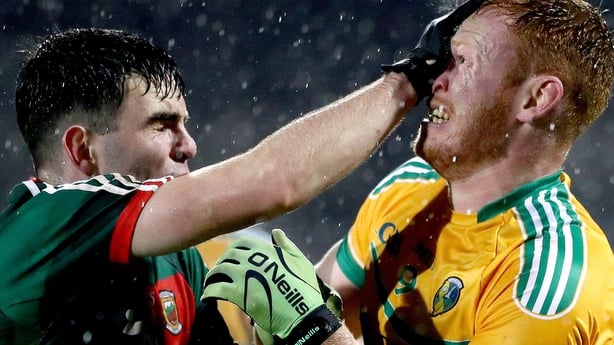 Leitrim struck late against Mayo to secure a share of the spoils as the sides drew an entertaining FBD Insurance League affair at MacHale Park, 0-13 to 1-10.

With the majority of Stephen Rochford’s squad due back from a holiday to Malaysia, an experimental side took to the field in Castlebar in front of 1,696 spectators.

The fresh faces got off to a strong start and led by four points with 19 minutes on the clock.

But late first-half scores from Brendan Gallagher and Keith Keegan saw the visitors lead 0-08 to 0-06 at the break.

Despite Alan Freeman being denied from the penalty spot by Diarmuid McKiernan, Mayo rallied to reel in Leitrim and two points from Ciaran Treacy helped the All-Ireland finalists go three points to the good in stoppage time.

But Leitrim had the final say with Aiden Flynn punching the ball to the back of the net in the last play of the game.

Mayo will face Galway at the same venue on Friday in the rearranged game after the original fixture was postponed last Sunday.

Elsewhere, Roscommon had a comfortable 3-19  to 2-10 win over Sligo in Kiltoom.

The Rossies did most of the heavy lifting in the first half with goals from Cian McKeon (2) and Diarmuid Murtagh handing them a 3-08 to 0-08 advantage after 35 minutes.

Sligo managed to make the scoreline respectable with goals from Adrian Marren and Kyle Cawley but victory for Kevin McStay’s side always looked a certainty.

AS IT HAPPENED - MCKENNA CUP AND FBD RECAP