Dublin's Noelle Healy was named as the 2017 TG4 senior Players’ Player of the Year at the annual All Stars banquet on Saturday night.

The St Brigid’s player, who also collected a third All Star award, crowned a stellar season by capturing the coveted individual honour at the Citywest Hotel.

Healy, 26, also won All-Star awards in 2014 and 2016, and she becomes the first Dublin player to win the senior Players’ Player of the Year award.

Healy was player of the match in September’s TG4 All-Ireland senior final victory over Mayo, in front of a record 46,286 attendance at Croke Park.

The TG4 intermediate Players’ Player of the Year award went to Tipperary’s Aisling McCarthy, who was player of the match in the Premier County’s TG4 All-Ireland intermediate final victory over Tyrone. 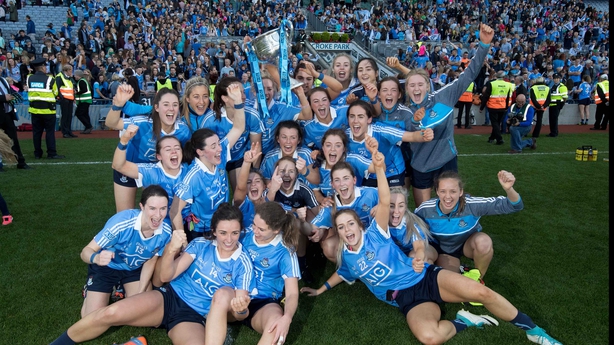 And while Derry may have lost the TG4 All-Ireland junior final replay to Fermanagh, Emma Doherty was voted by her peers as the TG4 junior Players’ Player of the Year.

Meanwhile, the Ladies Gaelic Football Association has announced that Bangkok in Thailand is the destination for the 2018 TG4 All-Star tour.

The touring party will depart on March 13 and arrive home on March 21, with an exhibition match pencilled in for St Patrick’s Day, March 17.

This will be the eighth All Star tour for the Ladies Gaelic Football Association, with players who won All Star awards in 2016 and 2017 set to join the travelling group.

Further details relating to the tour will be announced in due course.