Na Piarsaigh claimed a fourth Munster senior hurling club title thanks to Adrian Breen’s 1-5 haul, a win that leaves them as Limerick’s most successful hurling club on the provincial scene.

A fourth title in seven years was achieved thanks to a battling second-half display and means they have yet to lose a Munster club game at the 11th attempt.

Na Piarsaigh looked to be cruising to the win in the closing moments but Peter Hogan hit the net for Ballygunner, however there was no comeback as Adrian and David Breen hit late goals to clinch the win.

Ballygunner won the toss and elected to play into what appeared to be a tame breeze, but considering Pauric Mahony missed four of his first-half frees – two dropped short and two sailed wide – it turned out to be a significant impediment for the four-in-a-row Waterford champions.

But still Fergal Hartley’s side showed enough fight and class in the opening half to lead 1-4 to 0-6 at the interval.

A point from Adrian Breen gave Na Piarsaigh the lead after 30 seconds, a score that was matched three minutes later when Billy O’Keeffe pointed on the turn for Ballygunner.

A well worked move from right to left saw Tommy Grimes restore Na Piarsaigh’s lead after six minutes, but despite Pauric Mahony’s inaccuracies, Ballygunner levelled through David O’Sullivan before Conor Power fired a key goal after ten minutes. He made the most of an unfortunate slip from Jerome Boylan at the back and ran onto Shane O’Sullivan’s long pass to give his side a 1-2 to 0-2 lead. 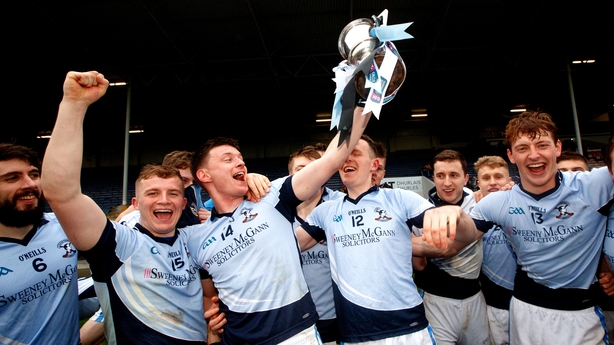 Pauric Mahony finally found the target midway through the half to stretch the lead to four points, but Na Piarsaigh – for whom Niall Buckley delivered endless accurate passes from deep – finished the half strongly.

A 65 from Ronan Lynch was followed by a sweet sideline cut from the same player, while Peter Casey and Adrian Breen points in added-time saw the Limerick winners close to within a point at the interval.

The first five minutes of the second-half epitomised the frantic nature of the game. Ballygunner flew out of the traps an Pauric Mahony, Peter Hogan and Billy O’Keeffe all pointed in quick succession. Na Piarsaigh’s play was riddled with poor handling and sloppy striking at that stage, but suddenly in the space of two minutes they turned a three point deficit into a one point lead.

Peter Casey settled the Limerick men with a good point from the right, before Kevin Downes sent David Breen in on goal and the former county man rattled the roof of the net. Immediately a point followed from Adrian Breen who also played a role in the goal and Na Piarsaigh led 1-8 to 1-7 after 37 minutes.

After spending nearly 40 minutes losing ruck balls and the majority of 50-50 challenges Na Piarsaigh were all of a sudden lording the ground war, and a quick pick up and shot by Downes from one such clash pushed the 2016 All-Ireland winners into a two-point lead with 18 minutes remaining.

Peter Hogan replied for Ballygunner, but Conor Boylan and Adrian Breen points in the closing stages, while a second Lynch sideline and Downes’ late point looked to have clinched the win for Na Piarsaigh.

But two minutes from time Peter Hogan fired a great goal to put a point between the sides, but Adrian Breen and David Breen hit back with two goals to see Na Piarsaigh run out convincing winners.