Ireland threatened a comeback in the second Test of the International Rules series but a strong finish saw Australia claim the Cormac McAnallen trophy.

Gary Brennan and Chris Barrett scored goals in the first quarter to give Ireland the lead, but no goals followed for either side in the remainder of the game.

The home side looked fitter and stronger in the second half as they whittled down the Irish advantage in a physical game played at a strong pace.

Conor McManus was an impressive peformer for Ireland but Nat Fyfe's ball-winning skills aided Australia as the dominated the final quarter to make it two wins from the two games. 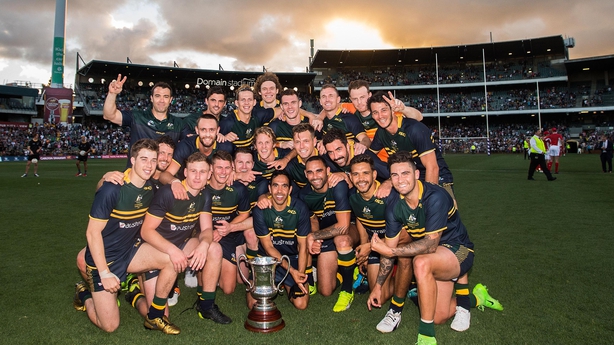 It was the start Ireland needed as Aidan O'Shea, who continually was in phyiscal confrontations throughout the game, fed Brennan to shoot into the net from close range.

The second goal followed two minutes later this time the Clare man fed Barrett to notch and the visitors were in front overall in the series.

Ireland led 30-17 at the break and a black card for Joel Selwood was followed by an altercation between both squadss after the half-time hooter.

The teams get into a confrontation following the half-time whistle in the International Rules. Second half coming up @rte2 pic.twitter.com/aAS8kjSAyy

Conor McManus kept Ireland in it with his fine shooting, scoring 16 points in all, as Australia took an overall lead of seven points going into the final quarter.

Australia continued to score overs as Ireland weakened in the final quarter and a flurry of late scores gave them victory today and overall in the two matches.