Ireland suffered a ten-point defeat in the first of their International Rules tests against Australia but ace attacker Conor McManus is confident the visitors can bounce back.

The Monaghan forward was the standout performer for Joe Kernan’s side in the Adelaide Oval finishing with 25 points, seven overs and four behinds.

The second test will take place in Perth next Saturday and McManus feels Ireland can still retain the Cormac McAnallen Cup.

"It’s a big lead but it’s only three overs and then it’s back to a one point game, that’s the way we have to look at it," McManus told RTÉ GAA Correspondent Marty Morrissey.

"There are lots of things we have to work on, some basic skills of the game that we didn’t execute well enough.

"We have that to work on over the week, if we can sharpen up on that I fully believe we can claw the lead back."

The game was played in 34 degree heat and although it appeared to take its toll towards the end of the second quarter, McManus doesn’t think it played a major role in the defeat.

"I don’t think the heat was a big factor, if you ask any of the lads I think there is more in the tank.

"We are going to be a wee bit warmer in Perth next week but we have this under our belts, we can store it and put it in the tank, recover as well as we can over the next few days and get back to work on Tuesday or Wednesday in training."

Despite his impressive individual performance, racking up 25 points, the Monaghan man was extremely disappointed with result.

"We got ourselves into a decent lead at one stage in the second quarter,  but we failed to capitalise on it in the third quarter or as the Australians call it the championship quarter.

"They really put the squeeze on us and turned us over, we made silly mistakes and they got to fifteen points clear at one stage.

"We got it back down to seven or eight in the final quarter and Australia tagged on a goal. We are very much still in the game and we hope to improve for next week." 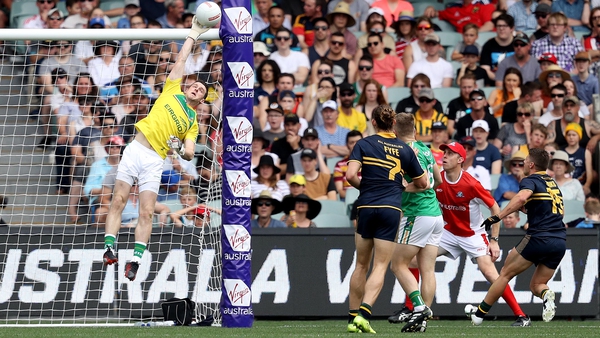