Con O'Callaghan's incredible year continued at Parnell Park this afternoon as he fired 1-03 to help AIB All-Ireland title holders Cuala into the last four of the Leinster championship.

The newly crowned PwC football All-Star and Young Footballer of the Year was a class apart and also set up Jake Malone for the Dubliners' other goal.

O'Callaghan lined out at full-forward and went through three different markers over the hour or so, including two-time All-Star defender Cillian Buckley.

The seven-point win came after another tight county championship campaign that saw Cuala claim their third title in a row after beating Kilmacud Crokes by just three points.

O'Callaghan lit up last year's provincial campaign with 6-10 in total and was eventually named Leinster club Player of the Year.

He opened his latest campaign with similar gusto and was involved in several excellent early moves as the hosts pulled the Dicksboro defence asunder.

Dual star O'Callaghan scored a sixth-minute point and then slipped away from his first marker, Evan Cody, in the ninth minute before blasting a shot just beyond the right upright.

Treacy and Nicky Kenny were also on the mark as Cuala opened up a 0-04 to 0-01 advantage.

O'Callaghan surged clear again in the 16th minute after a clever reverse pass on the right wing by Colum Sheanon.

O'Callaghan's shot was partially blocked this time but the ball popped up kindly for Malone to hammer home a Cuala goal.

That put Mattie Kenny's men, who started without top forward Mark Schutte due to a leg injury, 1-04 to 0-02 up and in a strong position to comfortably cover the bookmakers' three-point handicap. 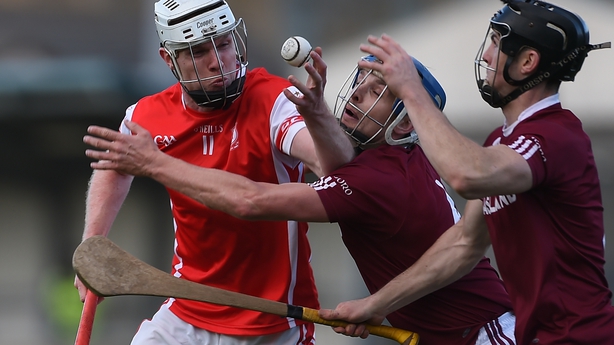 Dicksboro improved in the second quarter though and the sides shared 12 points evenly in this period, leaving Cuala 1-10 to 0-08 up at the break.

Treacy finished the first-half with six points, all from frees, while Kerry man and county midfielder Darragh O'Connell popped over a neat score.

Robbie Murphy was on the mark for Dicksboro and doubled his tally with the opening score of the second-half, bringing the margin down to just four points now.

Kilkenny star Buckley was moved from centre-back to full-back during the first-half to keep tabs on O'Callaghan but the youngster sped away from him in the 36th minute and slotted a fine point from the left wing.

It was the first of four Cuala scores that put daylight between the sides again and O'Callaghan's 45th-minute goal all but sealed the win.

He didn't have to do much this time as a combination of Kenny, Sean Treacy and Malone contributed down the left to play him in for a close-range finish.

Shane Stapleton continued to convert frees and 65's for visiting Dicksboro and they pulled back a 57th-minute goal through substitute Stephen Farrell.

But the Kilkenny champions didn't get closer than five points in the run-in and Cuala sealed a deserved win with scores from Niall Carty and Cronin.