Portlaoise advanced to the quarter-finals of the Leinster club football championship with far more ease than the final scoreline suggested at Bord na Móna O’Connor Park this afternoon.

Ciarán McEvoy’s first half goal was the crucial score in their 1-10 to 0-10 win over Rhode at the Tullamore venue.

The Offaly club never really got off the ground in a battle between two sides that between them have featured in each of the last five Leinster club finals, albeit without success for either club in any of those games against Dublin opposition.

They struggled to compete with the pace and purpose of the Portlaoise attack for most of this encounter, and it was only in the final twenty minutes of the game that they finally gathered some momentum.

During that phase they took advantage of their opponent’s failure to find the target with anything other than one long range free in the second half, right up until Gareth Dillon’s final insurance point deep into stoppage time.

Rhode manager Paschal Kellaghan afterwards said that he was hugely disappointed with the decision not to award a penalty for a late push in the back against Conor McNamee, but Portlaoise could and should have been out of sight by that stage.

While Rhode supporters aired their unhappiness with referee Barry Tiernan at the end of the game for that call, and a decision to penalise Anton Sullivan for a hand off while he was running down the stand side of the attack, the Dublin referee raised the ire of the visiting supporters in the opening minute with the first of several very significant decisions. 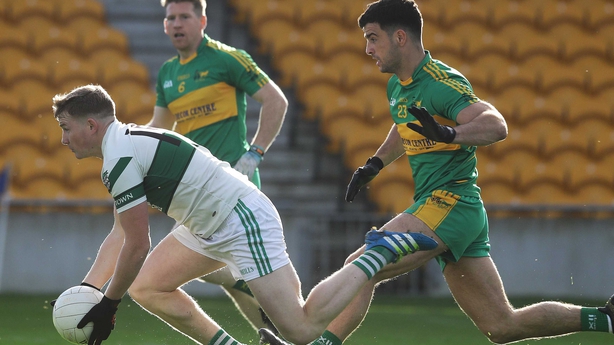 He disallowed a goal from Brian McCormack after the veteran fly hacked the ball to the net from close range, even though it looked as if Scott Lawless had been fouled in the build-up inside the large square.

However Portlaoise soon shook off that setback and settled into the tie with good early scores from McCormack, Conor Boyle and Gareth Dillon.

Niall McNamee was Rhode’s only scorer in for the first 27 minutes and he kept his side in touch, right up until a long ball from Paul Cahillane fell perfectly for McEvoy to drive in on the Rhode goal and slip the ball under Ken Garry.

Alan and Rúairí McNamee both missed chances to reply in kind for Rhode as they fell seven points in arrears, though that was cut to five (1-8 to 0-6) by half time.

Paul Cahillane’s free was the only score for the first ten minutes of the second half but as Portlaoise started to retreat into a more defensive position, Rhode were able to attack and with substitute Darren Garry playing well as a target man in the full forward line, they gradually eked their way back into the tie.

Niall McNamee pushed his points tally up to five, Ciarán Heavey blasted the ball over the bar from a tight angle and several more good chances were spurned also, as Rhode got back to within two points – but the closest they came to the goal they craved was their late penalty shout, while a late red card for Brian Darby only added to the misery for last year’s losing Leinster finalists.

Portlaoise now advance to another local derby clash in the quarter-final, this time against Kildare champions Moorefield on Sunday November 12th.