Goals in either half at Pairc Tailteann from Padraig McKeever and Conor Sheridan secured back to back Meath SFC titles for Simonstown Gaels.

Colm O'Rourke's side side claimed their maiden title just 12 months ago and deservedly held onto the Keegan Cup with an eight-point win.

It wasn't a classic contest but 19-year-old Hawthorn rookie Conor Nash and ex-Meath star Shane O'Rourke teamed up at midfield again and powered the Gaels on to a precious win.

Nash didn't score but set up their opening goal and dropped deep in the second-half to help out his defence and guide the team home.

Meath clubs have only won one game in the AIB Leinster club SFC in the last six years so Simonstown will hope to amend that statistic when they play the Wexford representatives on November 12.

Simonstown were seeking the victory to cap a thrilling campaign that saw them remarkably come from 11 points down last month to reach the semi-finals.

They trailed St Peter's, Dunboyne by that margin at half-time in their quarter-final tie and had to conjure a remarkable comeback to advance.

They took out Cian Ward's Wolfe Tones then, blasting four goals for the second game running, though found scores hard to come by initially here.

McKeever, who top scored with 1-04, had a goal chance in the opening 20 seconds but his shot was blocked off the line by Caolan Young, a late addition to the Summerhill team.

But McKeever netted at the second attempt in the 13th minute after being played into space on the right of goals by Nash.

It put Simonstown ahead for the first time and they remained in that position all the way.

Tobin finally split the posts in the 17th minute with a neat score from the left wing after a Brian Conlon dash upfield, pushing the north Navan outfit 1-02 to 0-03 ahead.

Conlon was replaced with an apparent injury shortly after though Simonstown retained a two-point advantage at the break, 1-03 to 0-04.

McKeever stretched Simonstown's lead with a converted free after the restart before their second goal arrived in the 36th minute, putting them six clear.

Summerhill's defence will have nightmares about the concession as a short kick-out went awry and Tobin stole possession and fed Sheridan to net from close range.

Summerhill upped the ante in the final 20 minutes or so but were completely out of luck in front of the posts.

Free-taker Brian Ennis hit the post with a 13-metre free and sub Kevin Ryan found the woodwork soon after.

Ennis did score a great point from a tight angle on the right wing late on but it was the team's only score from play in a miserable second-half and Simonstown always looked in control. 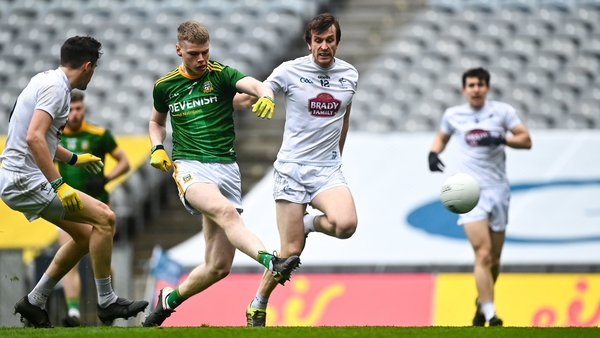