It was closer than many predicted but Kilkenny’s Double Double bid remains on track as they held off a determined Dublin at the Gaelic Grounds to reach the Liberty Insurance All-Ireland Senior Camogie Final.

Ann Downey’s side have already retained their National League title this year and are now just an hour away from doing the same in the Championship.

It was only in the third minute of injury time however, when substitutes Jenny Reddy and Jenny Clifford combined for the latter to goal that the Cats could relax completely however, having been severely tested.

The final margin is harsh on Dublin but they showed enough to confirm that they will be a force to be reckoned with in the coming seasons.

Kilkenny got off to the perfect start when they broke out of defence in trademark fashion and worked the sliotar via a number of supporting runners to Miriam Walsh, who was unceremoniously hauled down by Áine Woods for a penalty.

The 2016 player of the year Denise Gaule stepped up to the plate and she made no mistake, planting a shot to the right corner of the net with only two minutes elapsed.

Dublin, who were appearing in their first semi-final in 27 years and chasing a first final appearance in 31, had fallen three points behind against Wexford in the quarter-final and they displayed their composure once more in working their way back into this affair.

The threatening Siobhán Kehoe got Dublin off the mark with an excellent point after emerging from a ruck with possession. That was the start of a run of four points for the Metropolitans out of the next five scored, two of which came from Aisling Maher, and the margin was down to two. 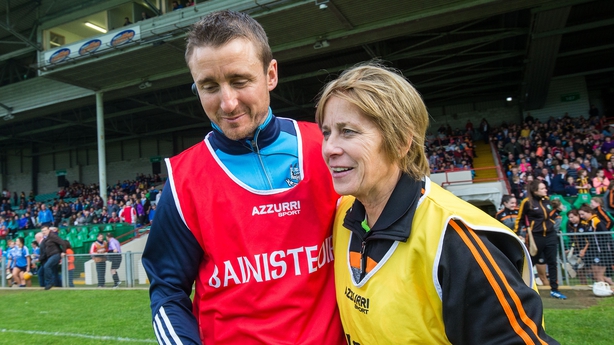 A strong run by Anna Farrell created a goal chance for Walsh but she was dispossessed by Eve O’Brien, who was magnificent throughout for the Sky Blues, as was Miriam Twomey.

There was a major talking point in the 29th minute when Catherine Foley was fortunate to escape with a yellow card and a stern talking to from referee Ray Kelly after a high challenge on Kehoe.

Ann Dalton was particularly influential as Kilkenny began to get their running game in motion, and the Stripeywomen scored the last three points of the half to lead by 1-5 to 0-4 at half time.

Dublin were playing into the wind in the second half but they halved the deficit inside six minutes with a point from Kehoe after a great break by Aisling Carolan and a converted free by goalkeeper Faye McCarthy.

Kilkenny are an extremely experienced outfit however and while being put to the pin of their collars by Dublin’s ferocious workrate, they had enough experience and scoring threat to put some breathing space between the teams with five of the next six points.

It was still a three-point game entering the final quarter when Maher replied to a Danielle Morrissey brace but points from Julieann Malone, Anna Farrell, Michelle Quilty and a wonderful effort by Meighan Farrell saw them pull clear.

Maher shot two more points to bring her tally to six but Clifford had the last say with her rocket of a finish to send the Noresiders back to Croke Park on September 10.