By Jackie Cahill at Nowlan Park

The Sky Blues, runners-up in the previous three seasons, proved too strong for a plucky Waterford outfit at Nowlan Park, claiming an 11-point victory to set up a last four clash with Armagh or Kerry on August 26.

Waterford, beaten Munster finalists but victors over Cavan last time out, finished the game with 13 players after Gráinne Kenneally was sent off in the 46th minute, before Megan Dunford picked out a late yellow card.

Kenneally kicked out at Dublin’s Lauren Magee in an off-the-ball incident and after consulting with his lineswoman, referee Seamus Mulvihill issued the red card.

Pat Sullivan’s charges still battled to the finish but Dublin had Aherne and player-of-the-match Nicole Owens in excellent form.

The pair landed 2-13 between them, as Owens contributed 1-4 from play in a classy outing.

Dublin have lots to work on ahead of the semi-final in a fortnight’s time but they had too much for a Waterford team that needed better performances from their leading players. 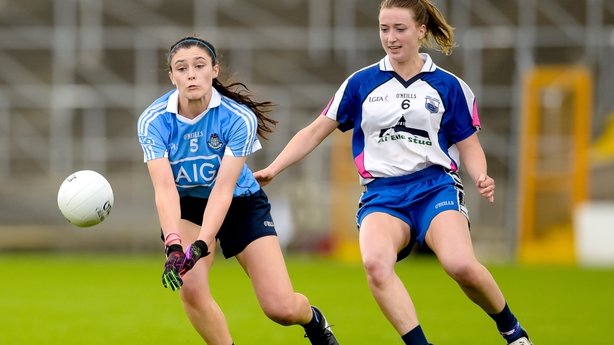 Dublin led by 1-8 to 0-4 at the break but Waterford’s challenge was hampered by eight wides in the first half, including four from normally reliable free-taker Maria Delahunty.

Massive underdogs before throw-in, Waterford needed to take the vast majority of the chances that presented themselves but they were competitive before Dublin opened up with an unanswered 1-5 approaching the interval.

Dublin went at Waterford from the start and were 0-3 to 0-0 up within seven minutes, an Owens point sandwiched between two Aherne efforts.

But Waterford responded with four points in succession to move in front, Aoife Murray, Eimear Fennell, Katie Murray and Michelle Ryan all on target.

That was Dublin’s cue to up the ante considerably, as Aherne popped over three frees to push them 0-6 to 0-4 clear.

Noelle Healy blazed over as Dublin cut through Waterford in the 25th minute but the goal did arrive a minute later, Owens palming the ball to the net to cap good work by Aherne and Healy.

Aherne’s free in the final minute completed the first half scoring, and opened up a seven-point lead for the Sky Blues.

Dublin lost Leah Caffrey to the sin-bin early in the second half after she picked up a yellow card but that loss didn’t derail Mick Bohan’s Leinster champions.

They were ten points clear 1-12 to 0-5, midway through the second when Carla Rowe fed a beautiful ball to Aherne, who clipped over a marvellous point.

Waterford lost Kenneally then but even a player light, they had the ball in the Dublin net in the 46th minute, Róisín Tobin on target from a poor re-start.

But Dublin scored their second goal with eight minutes left, Rowe setting up Aherne for a clinical finish off the underside of the crossbar.