The Sunday Game panel fear that Galway's Adrian Tuohy will face an anxious wait to see if there is any fallout from an incident in the All-Ireland hurling semi-final which saw Patrick 'Bonner' Maher's helmet come off.

During the first half of Galway’s one point victory at Croke Park, Tuohy and Maher were competing for the ball and the Galway corne back, while looking in the opposite direction, appeared to grab Maher’s helmet which then came loose.

The incident immediately brought to mind the red card shown to Tadhg de Búrca in Waterford’s quarter-final victory over Wexford, a decision which rules him out of the semi-final with Cork, pending an appeal to the Disputes Resolution Authority (DRA).

Because the referee took no action at the time, the way may now be clear for the Central Competitions Control Committee to review the incident and if they deem it necessary, to hand out a retrospective punishment.

Reflecting on the incident between Tuohy and Maher, Ger Loughnane defended Tuohy and claimed that he shouldn’t miss the All-Ireland final over something so ambiguous.

Speaking on the Sunday Game he said: "The big problem is what happened with Tadhg de Búrca. It must include deliberately pulling or taking hold of a face-guard or helmet. Now is that deliberate?

"I was convinced that Tadhg de Búrca’s wasn’t deliberate - he was trying to get away from Harry Kehoe. Harry Kehoe made a big scene to the linesman and the linesman calls the referee to get his attention.

"Bonner didn’t make a big scene today even though he had to go off and replace the helmet so I think it’s ridiculous.

"Things happen by accident or they just happen in the game. Are they deliberately dangerous? I don’t think so."

Jackie Tyrrell echoed Loughnane analysis and claimed that it’s impossible to prove intent because of the fact that Tuohy was looking away from Maher at the time.

Meanwhile Brendan Cumminns believes that the because of the suspension that de Búrca is now facing, the CCCC may feel that it’s necessary to step in and take action against Tuohy.

"The precedent has been set. If this stops Adrian Tuohy, no more than it stops Tadhg de Búrca from playing an All-Ireland semi-final or final, it’s a real tough one for players who are putting so much into it.

"It’s going to be a bit of a sweat for Adrian Tuohy in the coming days, it’s as simple as that."

'The precedent has been set' - The panel discuss the removal of Bonnar Maher's helmet by Galway's Adrian Tuohy pic.twitter.com/cwPwPvZK9j 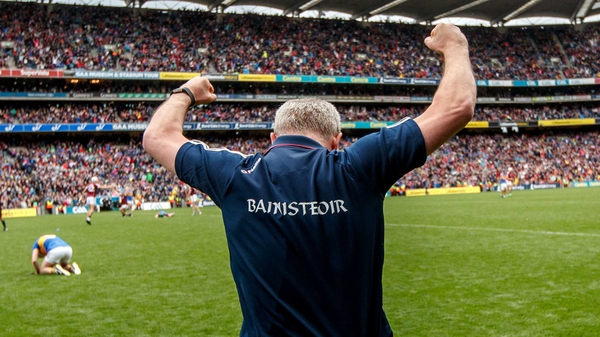 'Big moments are defined by big players & Joe stood up'