By John Fallon at Croke Park

Joe Canning produced an astonishing winning point in the fifth minute of stoppage time from the right sideline to send Galway into the All-Ireland final against either Cork or Waterford after a thrilling 0-22 to 1-18 at Croke Park.

The sides were level 13 times in a cracking match and just when a replay seemed on the cards, Canning struck his eleventh point of the game to send the All-Ireland champions crashing out.

John O’Dwyer had a chance to snatch an equaliser in the final play but his effort from the right tailed off and Galway’s passage to the final was secured.

Galway may not have scored a goal for a third championship match in a row but their ability to pick off points when they were most needed saw them home.

It’s the third year in a row that the All-Ireland semi-final has been decided by a single point between theses sides, with Galway gaining revenge for last year’s loss.

Now they will fancy their chance of a first All-Ireland title since 1988 after surviving a thrilling conclusion.

The sides were level six times in the opening half but Tipperary, playing with the breeze, led by 1-10 to 0-12 at the interval.

The goal came after 24 minutes when John McGrath pounced on an error by Galway goalkeeper Colm Callanan and corner-back Adrian Tuohy to flick the ball to the net.

That edged the All-Ireland champions back in front and after Johnny Coen levelled directly afterwards, Tipperary should have got a second goal when Galway full-back Daithi Burke slipped but Seamus Callanan’s ground stroke was superbly saved by the advancing goalkeeper Callanan.

Galway were on top in midfield and that began to have an impact after Tipperary opened up a 0-04 to 0-01 lead after just seven minutes with Callanan, Seamus Kennedy, Noel McGrath and John ‘Bubbles’ O’Dwyer had found the target.

Conor Cooney got Galway’s opening point after four minutes and they enjoyed their best spell when they hit four points without reply from the eighth to 15th minute with Conor Whelan, Coen, Conor Cooney and Cathal Mannion hit the target to lead for the first time by 0-05 to 0-04.

Callanan responded for Tipp before Joe Canning hit two either side of another Whelan point to open up a three points lead. 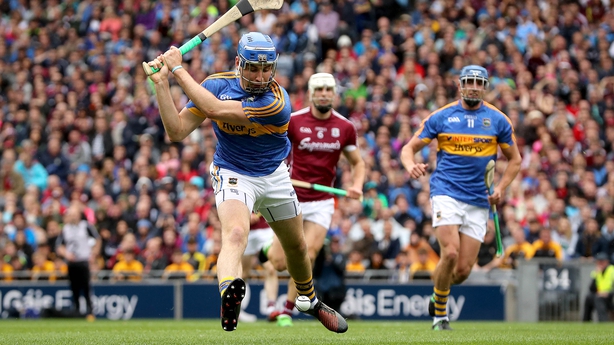 Paudie Maher pulled back a point before John McGrath pounced for his fifth goal of this year’s title race and his tenth championship goal in history.

Whelan’s third point edged Galway back in front after Coen’s equaliser following the goal but Callanan landed a free from distance to tie the game four minutes from the break.

Brendan Maher edged them back in front directly afterwards and while Canning hit a trademark point from a sideline on the right, Callanan and sub Jason Forde put two between them in stoppage time.

Galway cut that gap to the minimum when Canning got his fourth point when he made no mistake with a free from 60 metres to leave it 1-10 to 0-12 at the break in front of a crowd of 68,184.

Joseph Cooney levelled the sides for the seventh time inside a minute of the restart before the unrelated Conor Cooney flashed a goal chance wide after a good run.

Callanan responded with another free for Tipp which Canning immediately cancelled and then Whelan got his fourth point to make it 0-15 to 1-11 after 42 minutes.

Gearoid McInerney was superb at the heart of the Galway defence in the second-half and he will now bid to follow in the footsteps of his father Gerry who was wing-back for the Tribesmen when they triumphed in ’87 and ’88.

Brendan and Paudie Maher got Tipp back in front with points to lead by 1-13 to 0-15 after 49 minutes, but they never led after that, with Callanan saving well from Noel McGrath.

Galway hit back and two more points from Canning and a long range free from Padraig Mannion put them two in front.

‘Bubbles’ O’Dwyer and Noel McGrath pointed either side of a Canning ’65 and then John McGrath levelled 12 minutes from time at 1-16 to 0-19.

Another Canning point from play was cancelled by a point from O’Dwyer after Callanan missed another placed ball from distance.

Indeed, both sides were guilty of wides as the tension mounted - Galway finished with 14 to Tipp’s 11 - before Canning pointed a massive free from 90 metres to edge the Tribesmen in front three minutes from the end.

Brendan Maher stepped forward and showed great composure to tie the games with a free from 70 metres two minutes into stoppage.

That suggested a replay would be needed to separate them but Canning had other ideas and his point from distance out on the right wing proved to be a match-winning score to send Galway into the All-Ireland final. 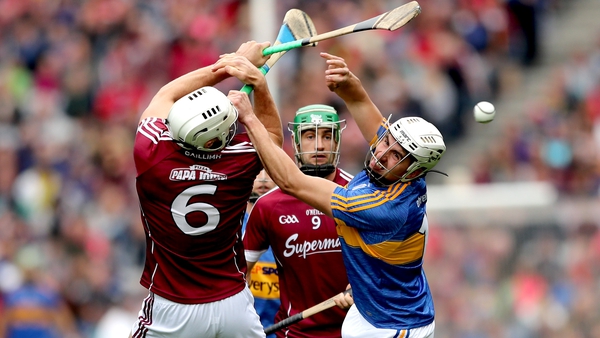