Tipperary manager Brian Boyle has revealed that it took a lot of introspection and honesty from the players and support staff for them to secure the famous victory over Offaly that set up a Liberty Insurance All-Ireland Senior Championship quarter-final with Galway on Saturday.

The game is part of a camogie extravaganza at Semple Stadium, with the first quarter-final between Dublin and Wexford kicking off proceedings at 5pm and the second game throwing-in at 7pm.

Both matches will be televised live on RTÉ2 and RTÉ Player.

The Premier County women had lost their opening three ties but such was the tight nature of their group that they knew a three-point win over Offaly would be sufficient if Wexford beat Limerick.

That is exactly what happened, allowing them to leapfrog over both Offaly and Limerick to claim the last coveted position in the knockout stages, with just a one-point superior score difference to the unlucky Faithfuls.

"It was all about us getting a result and a performance and that was a massive carrot for us coming into the game" said Boyle. We didn’t hold any thoughts really about quarter-finals. We had to go and win a game and to do that we had to put in a performance and get to maybe where we hadn’t been so far in the championship and I think we got that.

"There was a lot of hurt during the week and a lot of tough decisions and tough calls… we made them and everybody fronted up and I think that was where we got the energy from that got us over the line."

While much has been made of the fact that they could leave it so late and still qualify, that they had such a comparative score difference with their rivals, even though they had lost games, was an indication of how competitive they had been. 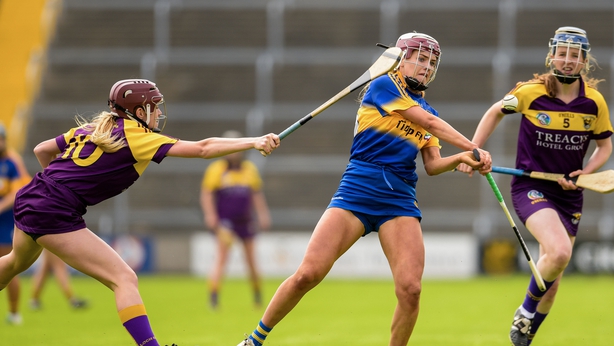 Megan Ryan scored some wonder points in Birr and is hopeful that they are coming to the boil at the right time for what will be a considerable challenge against Galway.

"We had nothing to lose going into (the Offaly game), we’d it all to gain" Ryan opined. "We gave our all on the field, every tackle we went in for 120% and we came out on top. Hopefully we’ll move on and go on again."

"Everything is gelling well and it’s time to peak now."