By Bill Kiely at Croke Park

Connacht rivals Mayo and Roscommon will meet again on Monday 7 August after drawing their All-Ireland SFC quarter-final at Croke Park, 1-12 to 2-09. Throw-in time will be decided tomorrow.

Donie Smith displayed nerves of steel as his late free salvaged a replay for the Connacht champions against neighbours Mayo.

Mayo were playing in their seventh successive quarter-final but found themselves seven points down after early goals from Fintan Cregg and Ciarain Murtagh.

The teams were level six times and Donie Smith’s late free meant they couldn’t be separated in the end and will now head for a replay.

This was Roscommon’s first time at this stage of the competition since 2001, but they had not won in Croke Park since 1980.

And Mayo secured a five-point win when these sides met in the league in February – Roscommon were subsequently relegated to Division 2.

But they secured a big win over Cavan on the final day and Kevin McStay’s men continued that form into championship where they hammered Leitrim before dethroning Galway in Connacht.

After just 31 seconds Fintan Cregg tapped over their first point, and although they had to wait six minutes for their next score, Enda Smith’s point was brilliant. 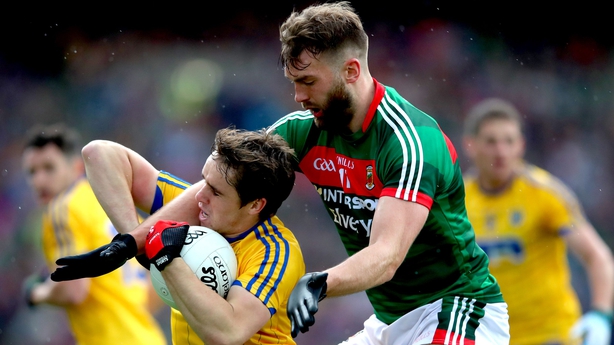 Keegan finally put Mayo on the scoreboard in the eighth minute with a well-taken point from distance but then Roscommon scored  their opening goal.

Roscommon, having had a fast start in the Connacht final, repeated that feat when Cregg gathered possession, wrestled his way past three Mayo defenders, and lobbed David Clarke.

Mayo lost to Galway in last year’s Connacht semi-final before they recovered through the qualifiers and eventually took Dublin to a replay in the All-Ireland final.

They also lost to Galway in the final four in their province this year before victories over Derry, Clare and Cork got them into the quarter-finals again.

Mayo started slowly in all of those games and in the 12th minute were 2-02 to 0-01 behind after another brilliant Roscommon goal. This time Diarmuid Murtagh passed to his brother Ciarain, and he slotted the ball under Clarke.

But Keegan drove forward moments later, his shot deflected off Niall McInerney and finished in the Roscommon net.

It was a massive turning point – Cillian O’Connor scored his first point from a free in the 18th minute and when he scored his second free three minutes before half-time Mayo were in front for the first time.

Roscommon had hit seven wides and not scored in 20 minutes. Ciarain Murtagh did tap over a free before half-time but Jason Doherty rounded off the scoring as Mayo led 1-08 to 2-03 at the interval.

Just 14 seconds after the resumption Conor Devaney halved the deficit for Roscommon and Diarmuid Murtagh levelled the game up with a free.

When Diarmuid Murtagh scored his second point, and first from play, Roscommon were back in front 2-06 to 1-08 in the 45th minute.

"We're happy to get a second bite at it" - Stephen Rochford reflects on Mayo's draw with Roscommon #RTEgaa pic.twitter.com/nv7829Axz4

After that both sides shot wide after wide and Cillian O’Connor’s third point tied the game up with five minute of normal time remaining.

Paddy Durcan edged Mayo in front from distance in the 68th minute and that looked like it would be a winner.

But four minutes into injury-time Donie Smith showed great composure and levelled the game once again with a huge free, forcing a replay to decided who goes forward to play Kerry in the All-Ireland semi-final on August 20.