Tyrone and Down will meet in the Ulster final on Sunday for the first time since 2003.

Down manager Eamonn Burns is quietly confident ahead of the clash and has his eyes on the prize.

The Mourne County are a surprise opponent for Tyrone in the decider after wins over Armagh and Monaghan so far.

"It will be a very interesting game," Burns told RTÉ Sport.

"We will go looking to play football definitely, we will be looking to bring intensity, to get a foothold in the game and give ourselves every chance to get over the line.

"We are looking forward to it, we know the task in front of us is big but we know the prize is great.

"We have a clean bill of health, the lads have worked hard over the last few weeks."

Sunday’s final (2pm, live blog on RTÉ.ie, live coverage on RTÉ2 TV and RTÉ Radio 1) will be Mickey Harte’s ninth at the helm of Tyrone. 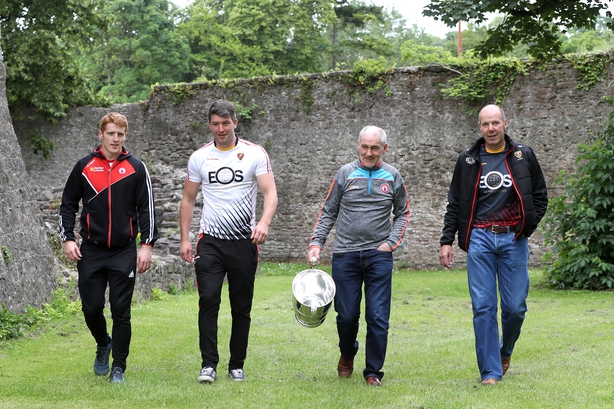 He’s won five of those and, of course, Burns is wary of the challenge as Tyrone are bidding for back-to-back Ulster titles.

The scalp of Monaghan was the most significant for Down so far and has given new belief to the county.

"Monaghan were hot favourites and rightfully so," said Burns.

"They had a very good league campaign; they turned in some great displays.

"I was confident going in, that once we got the ball rolling and we were focused on the task in front of us that we could cause problems.

"I knew if we got the ball in early and runners were moving off the inside men that we could get scores and if we kept it tight at the back we could win the game."

It’s been a bumpy road for Burns since he took over as manager of  Down, his side were relegated to Division 2 in 2016. They retained their Division two status this year and have progressed well since then.

He said: "I knew the task when I took over the side, that it wasn’t going to be easy.

"I knew that a lot of senior players were going to retire and move away for one reason or another, work commitments or family commitments.

"I knew that there was a lot of young talent in the county but they were going to take a wee while to settle down and settle into a team.

"It was clear that I was going to have to work really hard at it, as it wasn’t going to be an instant shift from bringing in young fellas to being successful so I was totally in tune with what was happening."