Goals from Cian Connolly and Brian Stack in each half saw Kevin McStay lead Roscommon to their first Connacht title in seven years as they avenged last year’s 11-point final defeat with a classy showing at Pearse Stadium.

Roscommon dominated from the first minute and only allowed Galway brief moments of supremacy, while an ugly late brawl in injury-time saw Micheal Lundy and Damien Comer sent off and Paul Conroy black carded.

Roscommon’s goalscorer Connolly was also sent off when he earned a yellow card, but after his side claimed a first win over either Mayo or Galway since 2001 it mattered not a jot to the Roscommon supporters in the 18,287 crowd, who flooded onto the pitch at full-time.

In their semi-final romp against Leitrim, the Roscommon forwards showed they were in a rich vein of form and they showed their Galway markers the same class in the early stages.

Ciaráin Murtagh pointed the first score of the game exactly a minute into the action, and with huge pressure on the Galway kickouts, Diarmuid Murtagh doubled the lead, before an off-the-ball foul by Declan Kyne on Connolly saw Ciaráin Murtagh on target again. 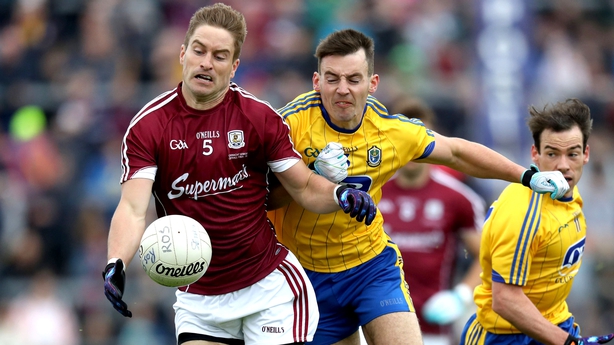 It was a rampant start from last year’s runners-up, but Galway finally made an impact on the scoreboard when Shane Walsh slotted a free from the ground following a foul on Damien Comer, who was double-marked any time the ball came in his direction.

The success that the Roscommon inside forward line were having continued though and they reeled off three points in two minutes – a free each from the two Murtagh brothers and a fine long range effort from Conor Devaney from distance in the 12th minute.

While Roscommon had a handful of in-form forwards Walsh was Galway’s sole threat and he curled over a love point to make to 0-06 to 0-02 after 14 minutes.

But, crucially, the next score came to Roscommon. It was Diarmuid Murtagh that picked out Connolly, isolated inside on his marker Cathal Sweeney, and Connolly’s finish to the net was controlled as he rolled the ball into the bottom corner for a seven-point lead after 14 minutes.

As the weather conditions worsened, so too did the quality of football on show. There was little sympathy from referee David Gough either, who fired out five yellow cards before the interval – some of them were very questionable.

Will this Brian Stack goal give Roscommon Connacht glory? Tune in now to @RTEOne and @TheSundayGame to find out pic.twitter.com/sIDkSyFhYK

Nine minutes from the interval, Galway came within the width of the post to a goal of their own when Michael Daly found himself on the end of a slick move, but after Diarmuid Murtagh’s third point, Walsh’s second free meant a 1-07 to 0-03 lead was Roscommon’s at half-time.

Nine first-half wides were a blight on Roscommon’s opening 35 and when Walsh and Comer added two quick points for the home side that slack shooting was punished.

But, six minutes after the break, Roscommon struck for a second goal. A mark was awarded to Brian Stack when he claimed a Galway kickout, but he continued on his powerful run, which ended in controlled finish low to Ruairi Lavelle’s right.

That goal put Roscommon 2-08 to 0-05 ahead and Galway looked dead and buried, but an impressive five points in four minutes saw Galway pull within four points.

But three of the next four scores were kicked by Roscommon to settle their nerves and it was left to sub Shane Killoran to kick the last point as McStay’s men claimed the title for the first time since 2010.