In front of 45,558 spectators at Semple Stadium, the Rebels captured a 53rd senior provincial crown, as Kieran Kingston’s men had five points to spare over Clare.

It was that kind of afternoon for Cork, who denied Clare their first Munster win at senior level since 1998.

Cork march on to an All-Ireland semi-final alongside their minors at Croke Park on August 13, while Clare must regroup for a quarter-final, in Cork, on the weekend of July 22/23.

Clare paid a heavy price for finishing with total of 15 wides, but Cork were deserved winners.

In the second half, young wing-back Mark Coleman was phenomenal, clipping over two points, including a majestic sideline cut from the Old Stand side of the field.

Clare battled gamely and while 2013 Hurler-of-the-Year Tony Kelly top-scored for them with 0-10, he also registered five wides and blasted a penalty over the bar.

Cadogan was effectively the difference between the sides, as the Douglas star posted 1-02 in the opening half.

Horgan kept things ticking over mainly from placed balls but could count himself slightly fortunate to remain on the pitch when he fouled Patrick O’Connor in the 21st minute.

The sides were level four times in the opening half before Cork opened up a gap.

After Cathal Malone had kicked an 11th minute effort off the Cork upright, the Rebels struck for goal from their next attack. 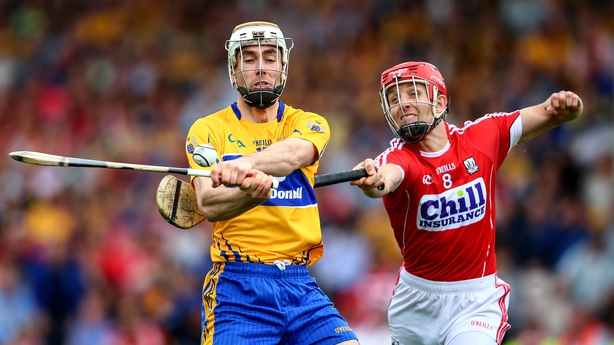 It was a wondferful finish from Cadogan, who collected Luke Meade’s ball before scampering away from Oisín O’Brien.

Cadogan bounced his shot low into the ground and past Andrew Fahy, sending the Cork fans massed on the Town End into ecstasy.

O’Brien, back in the Clare starting line-up after a knee injury, was called ashore before half-time, and replaced by Jason McCarthy.

But Clare’s response to falling 0-03 to 1-03 behind was impressive, as Tony Kelly hit three points on the spin to level matters. His third, and levelling, score was a missed penalty, as the Ballyea man sent his 19th minute effort blazing just over the crossbar, after Shane O’Donnell was hauled down.

From there until half-time, Cork outscored Clare by 0-07 to 0-02, Kelly putting over a 33rdminute free and John Conlon a point for the under-pressure Banner-men, as the Leesiders turned up the heat.

Conor Lehane, Darragh Fitzgibbon and Cadogan were on target with efforts from play, as Horgan nailed four frees to send Cork in with a cushion to defend. Defend it they did, going tit-for-tat with Clare on the scoreboard in the early second half exchanges, before moving seven points clear with less than 20 minutes remaining.

Kelly’s point a minute later had Clare within two but Cadogan responded for Cork with a massive score, before Malone tested the Cork woodwork again.

Coleman played one of his trademark crossfield balls, which allowed Horgan to point from the New Stand side from an acute angle, and Cork were 1-18 to 1-14 clear with 12 minutes left.

They kept the gap manageable from there and while Clare closed it back to three points again late on, Cadogan and Horgan (free) fittingly put over scores deep in stoppage time to seal southern silverware for the rampant Rebels.

Some doubts might have hung over them before this fixture, even after taking out All-Ireland champions Tipperary and Waterford, but Kingston’s emerging outfit answered most of the questions that came their way today.