Down held off a second half comeback from Monaghan to upset the odds and book their place the Ulster Football Final where Tyrone await.

The Mourne men, who lost by a massive 19 points margin when the sides met in last year’s championship, turned their fortunes around in spectacular fashion to score a heroic two-point success and set up a meeting with the Red Hand in the decider.

Darragh O’Hanlon netted a second half penalty to give them a seven points lead, and while the Farney men fought back to come within a point, Eamonn Burns’s side held on to seal it with a late breakaway score from Donal O’Hare.

In front of a crowd of 13,396, Down dominated the opening stages, but Conor McManus and Jack McCarron were unable to finish, and they needed a vital intercept from Karl O’Connell to prevent Peter Turley from sending Ryan Johnston in for a Down goal

Almost nine minutes had elapsed when corner back Ryan Wylie opened the scoring, but that was cancelled out by Mourne target man Connaire Harrison. 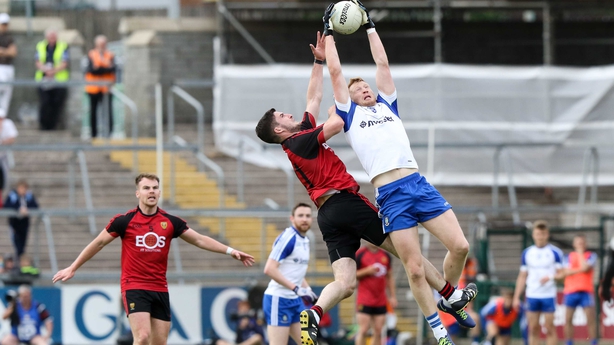 Both sides pushed up on the opposition restart, but the long kick-out favoured Monaghan midfielder Kieran Hughes, who claimed a string of marks as his side pushed two points clear through McManus in the 16th minute.

Three Darragh O’Hanlon frees had Down level by the 20th minute, but Conor McCarty intercepted a short kick-out to nudge his side back in front.

However, Down got to grips with Rory Beggan’s kick-outs to win possession around midfield and a couple of brilliant Harrison efforts had them in front for the first time.

Kevin McKernan sent over another spectacular score, and when Caolan Mooney raided with pace from deep to feed Conor Maginn for a sweetly struck score, Down led by four.

But late in the half, McCarron converted a free, and McManus finally escaped the shackles of Gerard McGovern to send a sweet score sailing between the posts. 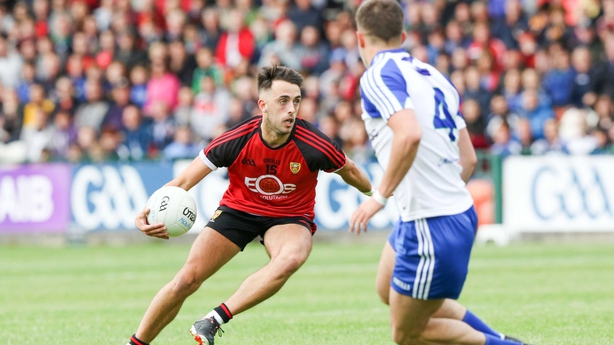 Down led by 0-10 to 0-8 at the break, and Harrison almost got in for a goal in the opening moments of the second half, his scrambled shot cleared away for a ’45, which goalkeeper Michael Cunningham converted.

McKernan launched another huge effort for a four point advantage, and when Niall Donnelly was pulled back by Colin Walshe, referee Paddy Neilan, who had replaced the injured David Coldrick at half-time, awarded a penalty.

O’Hanlon stepped up to drill the kicked to the net, and the suddenly led by a massive seven points margin.

McKernan burst forward repeatedly from his role as sweeper as they sought to build on the advantage, but Monaghan somehow found the resilience to shut the door in their opponents’ faces.

And they countered with power and support runners to craft the scores that brought them back into contention.

McManus knocked over three frees, and there were scores from Darren Hughes and McCarron as they narrowed the gap to a single point through Kieran Hughes.

Down retreated in desperate survival mode, with 15 players inside their own ’45, and did enough to hold on.

Just when it looked as if an equaliser and a replay were imminent, Monaghan lost possession, and the Mourne men broke from deep to hit the insurance point through substitute Donal O’Hare. 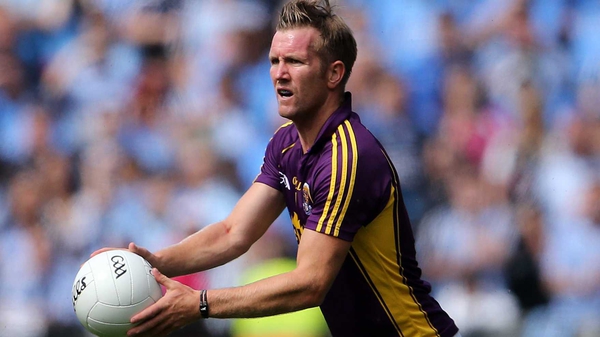