Seamus Harnedy may be only 26, but the Cork forward said the county's fountain of youth is pushing him to new heights after their Semple Stadium slaying of Waterford.

Harnedy grabbed 0-02 in a 0-23 to 1-15 win in Thurles that was defined by the Rebels' relentless energy and work rate.

In sweltering heat, Kieran Kingston's men overwhelmed the Déise with a ferocious appetite for victory, and Harnedy said it was a performance rooted in their intense approach to training.

"It was a scorcher of a day," Harnedy told RTÉ Sport.

"We're delighted to get over the line. It was a very intense affair, very hot out there, the ball zipping everywhere, chances galore - it's great to go on to the next day.

"The young lads are very enthusiastic and they help push on the old lads like myself in training!

"It was a great team effort. Everyone bought in to today.

"Thurles is one of the best pitches in the country so we'll be delighted to come back up. The main thing is, we're there and hopefully another day Pairc Ui Chaoimh will be ready." 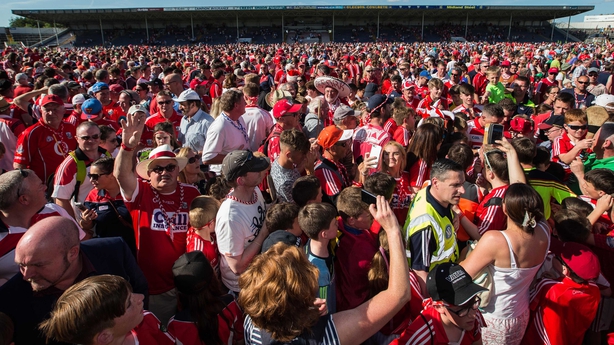 Captain Stephen McDonnell echoed Harnedy's sentiments as victory soothed Cork's aching limbs: "It was an end-to-end game and before you know it it's over. We're just taking it in at the moment. We're a bit caught for words. We're looking forward to the Munster final.

"The ground was very hard. It was probably the warmest (conditions) I've ever played in.

"At the end of the day you just follow the ball and play the game.

Colm Spillane also toasted a "phenomenal" day at the office.

"It's brilliant to be looking forward to a Munster final," he said. "Everyone is enjoying it.

"We're working really hard. Training is tough but fellas are enjoying it. Everyone goes out there and gives their all and when you have that, when you have a close bunch it makes it easier.

"Conditions were tough but we worked our socks off. Everyone is trying to do their best for the team."

Anthony Nash said he is so grateful for Cork support.....and they said thank you in return! pic.twitter.com/q3KWtSG8Mv